Biden Off to Divisive, Partisan Start With Executive Actions 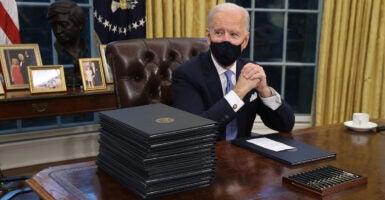 President Joe Biden already has abandoned solidarity and fellowship in favor of division and factionalism. Pictured: Biden prepares to sign a series of executive orders in the Oval Office just hours after being sworn in Jan. 20. (Photo: Chip Somodevilla/Getty Images)

During the early weeks of his presidency, Joe Biden has embraced the radical elements of his party and instituted divisive and wholly partisan policy changes. He has abandoned solidarity and fellowship in favor of division and factionalism.

Mere hours after championing “unity” and pledging to “be a president for all Americans” in his inaugural address, Biden signed 17 profoundly partisan, controversial, and contentious executive orders, memorandums, and proclamations.

Now numbering over 40, it would be nearly impossible to construe any of Biden’s executive actions as, in any way, unifying or bipartisan.

Among the policy changes, Biden effectively ordered schools and universities to allow students to compete on sports teams according to their “gender identity,” and to use whatever restrooms and locker rooms they prefer.

The executive order states: “Children should be able to learn without worrying about whether they will be denied access to the restroom, the locker room, or school sports.” It refers to Title IX of the Education Amendments of 1972, a civil rights law that prohibits discrimination based on sex in education programs or institutions that receive federal funding.

Not only does Biden’s executive order severely compromise the integrity of women’s athletics, it removes any semblance of privacy in the areas where that right is the most critical.

Days after mandating that students be allowed into the restrooms of the opposite biological sex, Biden reversed a Trump administration policy barring transgender individuals from serving in the military.

On its face, Biden’s order may not seem too egregious. However, the policy also mandates that the military pay for care for “transitioning” soldiers and other service members related to gender reassignment.

Biden also marched ahead with his devastating environmental agenda, halting construction of the Keystone XL pipeline, a project that would have been the world’s first carbon-neutral and sustainably powered oil pipeline. TC Energy Corp., the pipeline’s developer, estimates that over 10,000 jobs will be lost.

The president also halted gas and oil leasing and drilling permits on federal lands. A report prepared for the American Petroleum Institute by OnLocation Inc., a leading energy consulting firm, estimates that this ban will result in an average of 416,000 lost jobs and could cause as many as 1 million lost jobs by 2022.

On his first day in office, Biden embraced critical race theory, the idea that all components of American society, including the law and legal institutions, are inherently racist. He reversed a Trump administration initiative to ban this ideology from diversity training for federal workers and to review the content of such training.

Biden signed another executive order aimed at strengthening the power of federal labor unions and laying the groundwork for a minimum wage of $15 an hour for federal employees, a likely precursor to Biden’s plan to raise the minimum wage for all American workers. The Congressional Budget Office estimated that such an action would result in an average loss of 1.3 million jobs.

Additionally, Biden instituted several policies in support of illegal immigrants, including a 100-day moratorium on deportations, which a federal judge in Texas temporarily blocked; a halt on border wall construction; and a requirement that illegal immigrants be counted in the 2020 census.

Biden also rescinded the so-called Mexico City policy, which required foreign nongovernmental organizations to confirm that they would not “perform or actively promote abortion[s]” to be eligible for U.S. government funding. Biden’s revocation of the policy means that U.S. taxpayers effectively will fund abortions for residents of foreign nations.

Given the staggering number of contentious and blatantly partisan actions the new president already has taken, the word that comes to mind to describe Biden’s commitment to unity and bipartisanship is one he often favors: malarkey.