3 Reasons Puerto Rico Is Far From Ready for Statehood 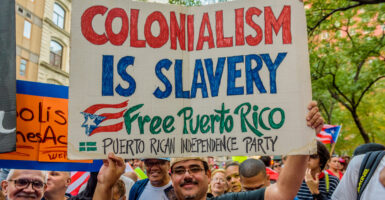 Democrats in Congress are eyeing statehood for Puerto Rico, despite the commonwealth's huge debt and systemic public corruption. Pictured: Not everyone is sold on the idea. Some in the Puerto Rican community in New York City, seen here on Sept. 28, 2017, advocate independence for the Caribbean island. (Photo: Erik McGregor/LightRocket via Getty Images)

Julia Canzano is a student at Boston College and a Heritage Foundation Academy Fellow.

Puerto Rico has long been stuck in limbo between becoming the 51st state and remaining an unincorporated U.S. territory. But now, with Democrats in control of Congress and the White House, the issue of Puerto Rican statehood is back on the table.

But it’s a tough argument to make that the Caribbean island should become a state, because it has a history of corruption, a growing debt, and an increasingly elderly population.

That said, Puerto Rico could start taking steps now to reduce corruption and look to a more prosperous and stable future, if not statehood.

Puerto Rico has a two-party system like the United States, and it is focused on statehood status. But because it’s an issue that only the U.S. Congress can decide, the parties don’t carry much weight on the matter.

Rather, once the governor is elected, he or she represents his or her interests and views more than that of the party he or she belongs to. That has left the door open for corruption, “with elections functioning as winner-takes-all contests,” according to a 2016 analysis in the New Labor Forum, a journal of the City University of New York School of Labor and Urban Studies.

Puerto Rico has faced issues of corruption among its leaders. In 2017, text messages were leaked that showed then-Puerto Rican Gov. Ricardo “Ricky” Rossello and members of his Cabinet making sexist, anti-gay, and violent comments about their constituents.

Additionally, the messages revealed a scandal that involved placing external contractors in key positions within agencies to control information, as well as sharing confidential government information with private clients.

More recently, in 2020, following a series of earthquakes, investigators found warehouses full of bottled water and other supplies that were sent from the United States to those suffering from Hurricane Maria in 2017 that never reached communities.

Adding insult to injury, tourism has suffered heavily from the COVID-19 pandemic, as well as from natural disasters, such as Maria, that have struck the island.

Passed in 2019, Act 60 was designed to attract U.S. companies and investors in a variety of industries, not just tourism, and thereby stimulate the Puerto Rican economy.

In exchange, the Puerto Rican government allows companies to receive tax incentives and other benefits.

Puerto Rico’s debt crisis also weighs heavily on its ability to recover economically. As of 2020, Puerto Rico had $129 billion in debt.

Massive spending to recover from the 2017 hurricanes—Maria and before it Irma—have pushed Puerto Rico even further back economically, and it will struggle to repay its debt.

Puerto Rico’s population also presents interesting demographic challenges. A large, aging population is supported by a much smaller, younger one. Many college graduates leave for the mainland U.S. for better job opportunities and more benefits.

The island’s population has fallen by more than 400,000 since its peak in 2004. Additionally, the median household income of Puerto Ricans who live on the island is $18,626, while those who are born on the island but live on the mainland have a median income of $33,000.

Despite a shrinking population, the Puerto Rican government has 78 municipalities that are each run by a mayor and a municipal legislature. The smallest municipality, Culebra, has a population of 1,800, while that of San Juan, the capital, is about 335,000.

That’s a large number of municipalities for such a small population. That in turn means that there are that many more jobs for mayors with full municipal councils for areas with populations the size of that of a large high school.

Additionally, government jobs comprise the largest portion of Puerto Rico’s workforce. About 24% of the Puerto Rican nonfarm workforce is employed in the government, compared with 6% of the workforce employed by the federal government in the United States.

With fewer municipalities, there would be fewer government jobs and less risk of a spoils system and corruption. By reducing the number of municipalities, as some have suggested, Puerto Rico could still have forms of government responsive to residents’ needs without tying up so many fiscal resources.

Puerto Rico should offer incentives for engineering companies to continue to seek those graduates and become established there to keep those workers on the island and contributing to the Puerto Rican economy.

With such solutions, Puerto Rico could start taking steps toward a less corrupt and more economically stable future, with or without statehood.