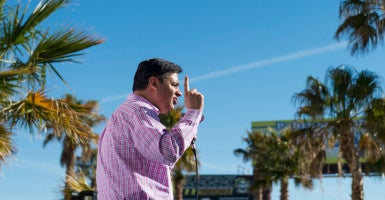 Rep. Raul Labrador, R-Idaho, lived in Puerto Rico until he was 13 years old, and he's been an active conservative member in seeking a solution to the island's debt crisis. (Photo: Bill Clark/CQ Roll Call/Newscom)

Puerto Rico made Rep. Raul Labrador, but the fact he was born there, and called it home until he was 13 years old did not inspire him to help the island with its debt crisis.

In his five years as a lawmaker, Labrador’s political capital has been so invested in his conservative constituents in Idaho, that he heeded little mind to Puerto Rico. Though, of all the committees in Congress, he chose to join the two that have direct oversight over the island — a coincidence he swears was an accident.

“I had absolutely no desire to get involved in Puerto Rico issues,” said Labrador, R-Idaho, who is less known for his heritage than for his role as a founding member of the conservative House Freedom Caucus. “Because back home, I think less than one percent of the people in the state of Idaho are Puerto Rican. I joke that it is me and my five kids — we are the only Puerto Ricans in Idaho.”

It’s not like Labrador, 48, is disconnected from his home island. Some of his six siblings still live there, including his brother, Eric, a former government employee who is the president of the Puerto Rican Football Federation (soccer).

While Labrador’s late mother brought him to Las Vegas to pursue opportunity on the mainland, his father stayed in Puerto Rico until he died.

But as Puerto Rico and its $72 billion debt load became a problem for Congress, Labrador, from his perch on the Natural Resources Committee — which was assigned the issue — approached it like he does anything else.

“The people of Puerto Rico get mad at me because I always say my first priority is the people of Idaho,” Labrador said. “This one just was kind of thrown on my lap when you are on the committee of jurisdiction. So no, it wasn’t intentional and it wasn’t like it felt like a cause to me. I don’t feel any pressure about this. I didn’t come to Congress to solve the problems of Puerto Rico. I came to Congress to solve the problems of the United States.”

When it was clear that the Republican House leadership, and GOP-led Natural Resources Committee, would pursue what Labrador considers a “conservatively responsible” solution to Puerto Rico’s woes, he grew more invested in the process.

And now, as the committee Tuesday night began to consider legislation to address Puerto Rico’s debt crisis that has Labrador’s prints all over it, he is one of the biggest boosters of the cause. His sway with conservative Freedom Caucus colleagues could determine if the plan succeeds in Congress.

“I feel good about the work we have done and I hope that it moves forward,” Labrador said. “When conservatives look at this, I know [some groups] will come out against it. And I am a little sad about that because we worked really hard to make sure the bill was a conservative bill that would protect the creditors, to protect the rule of law. Now, I wish we had a little bit more in the areas of economic development, but those were fights we could not win.”

In an interview with The Daily Signal in his office on Tuesday, Labrador explained his approach, and personal transformation, in helping craft bipartisan legislation to save Puerto Rico.

While Labrador said he would wait until the committee vote to declare his official position on the bill, it was clear he was proud of his role in getting it to a point where he and House Speaker Paul Ryan, R-Wis., believe it can get the support of the majority of Republicans.

The revised bill, introduced last week, would put Puerto Rico’s fiscal policy under the authority of a federal control board and establish a legal framework to restructure its $72 billion in debt.

Chapter 9 of the U.S. bankruptcy code bars Puerto Rico from getting any type of debt relief.

The final legislation came a long way from where it was when the original version of the bill was introduced in April, and Natural Resources Committee Chairman Rob Bishop, R-Utah, had to abruptly cancel a vote because it lacked Republican support.

>>>GOP Fights Over Whether Puerto Rico Rescue Plan Is a ‘Bailout’

At that time, Labrador expressed frustration with the direction of the negotiations, and even laid out conditions for him and other conservatives to support it, namely that different classes of bondholders would be treated fairly, and the restructuring process set up for the island could not be duplicated by financially struggling states.

“At first, I went into it trying to figure if it was even a salvageable bill,” Labrador said. “If it was a really bad bill, if it was just a big pile of turd I was going to dress up a little bit, then I wasn’t going to do that. If they hadn’t made the changes they made that actually made it a conservative bill that wasn’t going to have the spillover effect on the states, there was no way I was going back it.”

Labrador takes credit for two new provisions in the legislation, including language that payments to pensioners would not be prioritized over secured debt. After counseling bond companies that don’t have a stake in Puerto Rico, Labrador worried that protecting pension payments over payments to bondholders — as Detroit did as part of its 2013 bankruptcy — would set a dangerous precedent for U.S. cities and states.

A second addition from Labrador would ensure that Puerto Rico’s governor cannot by executive action transfer funds within the government.

Labrador believes that these conditions, and the fact that no federal taxpayer money is going to Puerto Rico, proves wrong attack ads that were aired in the home districts of conservative lawmakers, which slammed the deal as a “bailout.”

“Anybody who calls this a bailout does not understand what a bailout is,” said @Raul_Labrador.

“What really did drive me to try and find a solution was the false advertising,” Labrador said. “The moment they started lying in my district, that made it personal for me.”

“Anyone who is calling this a bailout has not read the bill and doesn’t understand the bill,” Labrador added. “You can make a policy argument about whether we should even be doing something. That’s a valid policy question. But anybody who calls this a bailout does not understand what a bailout is.”

Labrador acknowledges it is typically against his conservative principles to help a financially struggling entity that he believes is responsible for its own problems.

He even refers to Puerto Rico as a “failed socialist experiment in the United States,” and he derides the island as fiscally reckless enough to think it was a smart idea to “build an ice skating rink in the middle of a tropical island.”

Labrador admits he feels resentful towards Puerto Rico, like a tough love father who raised a son that took the wrong path.

“I do care about what happens to the island,” Labrador said. “I love the people of Puerto Rico. They are some of the warmest people in the world. And at the same time that I care, I am pretty mad about the political decisions that they’ve made.”

Yet Labrador says that assisting Puerto Rico through its current fiscal mess will free the island to pursue sustainable economic reform.

And that makes Labrador feel good about what he did.

“My mom passed away 10 years ago, and if I would have told her, hey I am going to be right in the middle of a debate on the future of Puerto Rico, I think she would have been pretty happy, even though she and I were totally different politically,” Labrador said. “She would be proud of the fact that I am actually trying to do the right thing — I’m not doing the politically expedient thing to do.”