The Right Solution for Puerto Rico 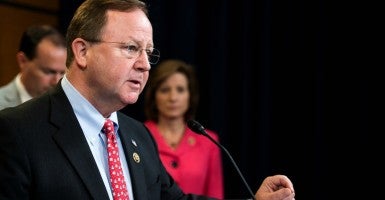 Finally, support from Congress for something other than a federal bailout for Puerto Rico or letting the commonwealth break its contracts and constitutional obligations.

The RSC opposes granting access to Chapter 9 bankruptcy for Puerto Rico or access to similar forced restructuring of debt. The RSC does support enacting pro-growth reforms that would alleviate the burden that current federal policies place on the territory.

This is precisely the right course of action. The heart of Puerto Rico’s financial crisis is an economic crisis.

Throwing money at the commonwealth or allowing it to abandon the rule of law won’t fix Puerto Rico’s economy. Rather, it would be akin to bringing a new engine to move a stalled train without first removing some dead weight to see if the train can move on its own. Likewise, intervening in Puerto Rico before removing existing barriers to growth would waste taxpayer resources and set a dangerous precedent.

So what pro-growth reforms can Congress enact?

For starters, it can exempt Puerto Rico from the federal minimum wage, which is roughly equivalent to a $20 minimum wage on the U.S. mainland. In other words, it has crippled Puerto Rico’s labor market, making it impossible for certain businesses to operate on the island and pushing many workers into underground employment, where they lack legal protections, don’t contribute to the island’s taxes, and don’t become eligible for Social Security.

Congress can also provide Puerto Rico with the same exemption from the maritime Jones Act that is gives the U.S. Virgin Islands.

An antiquated and protectionist law, the Jones Act requires that all shipments between two U.S. destinations occur on a vessel that is U.S.-built, U.S.-flagged, and at least 75 percent U.S.-crewed. This roughly doubles the cost of shipping goods from Puerto Rico to the mainland. As a result, businesses that have to ship goods are unlikely to set up shop in Puerto Rico, and Puerto Ricans pay more for everyday products such as energy because shipping costs preclude their buying from the mainland.

To be clear, however, Congress cannot solve Puerto Rico’s problems. While the federal government can reduce its drag on Puerto Rico’s economy, it cannot change problems of Puerto Rico’s own making.

For decades, the commonwealth has been living beyond its means, plagued by incompetent administrations, political corruption, cronyism, and financial mismanagement.

Just this past December, Puerto Rico’s governor made the decision to hand out $120 million in Christmas bonuses to government employees just weeks before it defaulted on $37 million in payments to its creditors. Decisions like this show that Puerto Rico is not serious about making the right choices and necessary reforms to transform its economy.

Part of the reason it is not serious may be that the government is holding out hope for a federal bailout.

But as Republican Study Committee Chairman Bill Flores, R-Texas, rightly points out, “[a] direct taxpayer-funded bailout would not only cost Americans tens of billions of dollars, it would fail to address the root drivers of Puerto Rico’s debt.” Moreover, changing the bankruptcy law to the Puerto Rican government’s advantage would set a dangerous precedent that Congress can “delegitimize future transactions.”

Congress should take a do-no-harm approach with Puerto Rico, relieving it from economically damaging regulations such as the minimum wage and Jones Act and then allowing the commonwealth to implement its own reforms and negotiate its own debts.