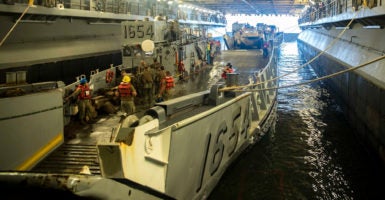 Landing craft utilities prepare to depart the well deck of the amphibious assault ship USS Kearsarge (LHD 3) to transport personnel and equipment to Puerto Rico. Kearsarge is assisting with relief efforts in the aftermath of Hurricane Maria. The Department of Defense is supporting the Federal Emergency Management Agency, the lead federal agency, in helping those affected by Hurricane Maria to minimize suffering and is one component of the overall whole-of-government response effort. (Photo: Kaitlyn Eads/U.S. Navy/Polaris/Newscom)

A relatively obscure maritime law is in the spotlight after the devastation of Puerto Rico from Hurricane Maria.

The Merchant Marine Act of 1920, better known as the Jones Act, has typically been confined to debates about energy independence, trade, and regulation. The law requires shipments between two U.S. ports be on U.S.-built, U.S.-manned, and U.S.-owned vessels.

The Trump administration has granted temporary waivers to the law after recent hurricanes in Texas and Florida, but has yet to do so in Puerto Rico, despite pressure from Congress. The previous waivers were primarily for the purpose of transporting fuel.

“Puerto Rico didn’t need this storm to be ground zero on the harm done by the Jones Act,” Salim Furth, a senior fellow in macroeconomics at The Heritage Foundation, told The Daily Signal. “They were already being cut off from the main market, effectively paying double the shipping costs.”

It’s also a problem for other U.S. regions apart from the continental United States, noted James Coleman, a law professor at Southern Methodist University, the author of a forthcoming white paper on the subject for the Federalist Society’s Regulatory Transparency Project. He writes:

The Jones Act has also long imposed particularly heavy burdens on far-flung domestic ports like Hawaii, Alaska, and Puerto Rico, because they often import commodities from the United States.

This problem is particularly salient in Puerto Rico, which just declared bankruptcy because it is $74 billion in debt.

“There’s two issues with Puerto Rico. One is the potential shortage of carriers with the U.S. flag carriers,” Duke told the committee Wednesday. “The second is tariffs and other things that make the fuel cost high in Puerto Rico, and that’s what we’re hearing, too, that people are suffering from the tariffs.”

Sen. John McCain, R-Ariz., a longtime advocate for repealing the law, wrote a letter to Duke this week asking for a waiver for Puerto Rico. He also tweeted about it Wednesday.

I intro’d bill earlier this year to repeal the #JonesAct, which is more imp’t than ever for hurricane-ravaged areas https://t.co/Y31u2BE8Ji

Today I urged @DHSgov to waive the #JonesAct for #PuertoRico, which is critical for speeding up recovery efforts https://t.co/W7GTROJ8Pz

Eight House Democrats also have asked for a waiver for Puerto Rico, in a letter to Duke, writing:

The island is now facing an unprecedented, uphill battle to rebuild its homes, businesses and communities. Temporarily loosening these requirements—for the express purposes of disaster recovery—will allow Puerto Rico to have more access to the oil needed for its power plants, food, medicines, clothing, and building supplies.

President Barack Obama declined calls to waive the Jones Act to help in the Deepwater Horizon oil spill cleanup in the Gulf of Mexico in 2010. President George W. Bush did waive the law after Hurricane Katrina in 2005.

The American Maritime Partnership, the U.S. shipbuilders lobby, contends that lawmakers are making false assumptions about the law’s impact, and released what it calls a “fact check” on Wednesday, disputing assertions from what it labeled “a parade of politicians and ‘experts.’”

False. Any foreign vessel can call on Puerto Rico. The Government Accountability Office (GAO) noted in a 2011 report that two-thirds of the ships serving Puerto Rico were foreign ships. 55 different foreign carriers provided imported cargo to Puerto Rico in a single month, as cited as an example by GAO.

Claim: A Jones Act waiver would add efficiency to the delivery of essential cargoes to impacted communities.

Already, there are logistical bottlenecks for Jones Act cargoes as a result of the inability to distribute goods within Puerto Rico due to road blockages, communications disruptions, and concerns about equipment shortages, including trucks, chassis, and containers.

“The men and women of the American maritime industry stand committed to the communities in Puerto Rico impacted by Hurricane Maria, where many of our own employees and their families reside and are working around the clock to respond to the communities in need,” Thomas A. Allegretti, chairman of the American Maritime Partnership, said in a statement.

“A steady stream of additional supplies keeps arriving in Puerto Rico on American vessels and on international ships from around the world. The problem now is distributing supplies from Puerto Rico’s ports inland by surface transportation,” he said.

The hurricane season could provide some momentum for Congress to consider repealing the law, said Coleman, the SMU law professor.

The law itself could pose political problems for President Donald Trump, however, Coleman said.

“There are tensions between ‘America First’ and the goal of economic growth and energy dominance,” Coleman said. “It’s a protectionist law that protects certain groups, but it harms the productivity of other groups.”

Northeastern states are more likely to get oil from foreign sources, rather than from domestic sources, because of the law, Coleman contends in his white paper.

Unfortunately, because of the Jones Act, it costs three times as much to ship oil from Texas to refineries on the U.S. East Coast as it costs to ship oil [from] Canada.

There are simply not enough Jones Act compliant ships to carry Texas oil to the U.S. East Coast, so it must be shipped [from] abroad. Similarly, northeastern U.S. refineries pay more than three times as much to ship oil from Texas, rather than from West Africa or Saudi Arabia.

As a result, the northeastern U.S. is more likely to rely on foreign sources of crude oil, while, with the ban on U.S. oil exports now ended, U.S. oil is shipped longer distances abroad, leaving American consumers behind.

A compelling “America First” argument is that repeal of the Jones Act would allow freer trade within the borders of the United States, said Furth of The Heritage Foundation.

“It’s also in line with ‘drain the swamp’ because this is a lobbyists’ law,” Furth said. “The lawyered-up, lobbied-up industries are aware their profits depending heavily on this law.”