Media May Ignore It, but Biden Presidency Is Already Radical 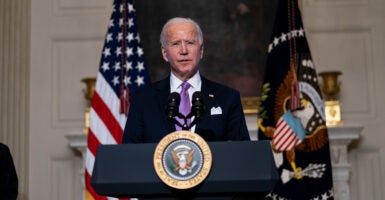 For four years, we were informed by our establishment media that President Donald Trump’s behavior was “not normal.”

The abnormality of Trump’s behavior became a near rallying cry for the self-appointed heroes of journalism, who spent every waking hour poring over his bizarre tweets and his bloviating self-absorption. The media dedicated themselves to preventing Trump’s supposed normalization.

Now, the media inform us, we have been graced by the most normal normal person to have ever normalled: President Joe Biden. Biden, they proclaim, is utterly boring, nondescript, barely worthy of coverage. His administration, too, is paradigmatically normal.

Yascha Mounk of The Atlantic tweets, “It is so nice to have a boring President.” Alleged media watchdog Brian Stelter asked this week whether Biden is “making the news boring again,” adding, “The Biden White House is clearly a break from the chaos and incompetence of Trump world.”

For his part, Biden obviously revels in this sort of coverage. This week, his favorite ice cream flavor (chocolate chip) was tweeted out as well as a retweet of first lady Jill Biden’s announcement that Champ and Major, the new first pets, had entered the White House.

On a personal level, Biden is clearly more “normal” than Trump—although treating Biden, a career politician worth nearly $10 million, as the height of normality is rather stunning.

The goal for the establishment media isn’t to point out merely that Biden is a sort of American Everyman. It’s to use that supposed normalcy to disguise the fact that his agenda is absolutely abnormal.

The dirty little secret of the Trump administration is that despite Trump’s personal abnormality, his agenda was well in line with past precedent, and with mainstream American opinions on everything from taxes to military policy.

Trump did not radically shift American policy. Biden will. Within the first five days of his presidency, he issued 30 executive orders, compared with four for Trump, five for Barack Obama, and zero for George W. Bush.

Those executive orders included endorsement of radical reinterpretation of American history; killing the Keystone XL pipeline, along with its attendant estimated 11,000 American jobs; forcing the military to allow troops to undergo gender reassignment surgery; and forcing federally funded institutions to allow biological men who identify as transgender to compete alongside biological women, among others.

He is reportedly pursuing an immigration plan directed toward reopening America’s borders. He has staffed his Cabinet by intersectional box-checking.

Biden’s policy is indeed radical. But because Biden is presented as a normal person, we’re supposed to ignore all of that. We’re supposed to simply be grateful for the “return to normalcy”—complete with caving to the teachers unions that seek to keep schools closed indeterminately, reentering a long-dead deal with the Iranian theocracy, firing government staffers with whom he disagrees, and lying openly about the vaccine distribution plan he inherited.

Meanwhile, our media pat themselves on the back. It’s rare to see a profession declare itself irrelevant, but that’s what many in the media are doing these days.

According to Stelter, it’s “refreshing” that Biden’s team promises accountability and transparency. According to Margaret Sullivan of The Washington Post, the media must learn their lesson from the Trump era and cover Democrats more sycophantically.

Joe Biden may be a relatively normal guy. But none of this is normal. And pretending it is represents just another way for the media to reject legitimate criticisms of an administration seeking radicalism right off the bat.