Get Ready for 4 Years of Media Sycophancy 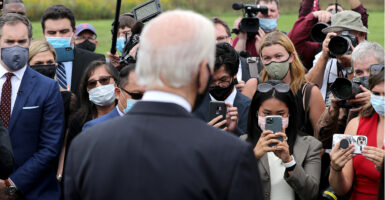 Then-Democratic presidential nominee Joe Biden talks to journalists after laying a wreath at the Flight 93 National Memorial on the 19th anniversary of the 9/11 terror attacks Sept. 11, 2020, in Shanksville, Pennsylvania. (Photo: Chip Somodevilla/Getty Images)

Perhaps the most awkward manifestation of this sycophancy came when Harris—an extraordinarily and transparently manipulative and mechanical politician—spouted a canned speech about relentlessness. “I was raised to not hear no—let me be clear about it,” said Harris. “I eat no for breakfast!”

This prompted a spasm of ecstasy from Pauley, who immediately reflected Harris’ bizarrely inappropriate laughter with an enormous grin of her own.

It will be four long years.

For four years, the media complained that outgoing President Donald Trump treated them as an enemy. They self-servingly claimed that they were actually the protectors of democracy and individual rights.

It took all of one month after Trump’s inauguration for The Washington Post to add the slogan “Democracy Dies in Darkness” to its masthead. By October 2017, CNN began running ads explaining that it was all about “Facts First.”

Trump, for his part, attacked the media whether they deserved it or not: Every disparaging headline, true or not, became “fake news.” That was unjustified and wrong, obviously.

But the media’s lack of credibility wasn’t solely attributable to Trump. It resulted from their own journalistic malfeasance for years on end during former President Barack Obama’s administration—”his only scandal was wearing a tan suit!”—followed by their aggressive repetition of even the most thinly sourced scandal regarding Trump.

And now we’ll return to the gaslighting of the Obama era, when members of the Obama team could openly admit to lying to the media, only to receive obsequious praise in return.

Already, media outlets are praising the newfound veracity of Biden’s press team—despite the fact that Jen Psaki, Biden’s choice for White House press secretary, was accused of openly and explicitly lying to the media in 2016.

Media members are even admitting that the vacation has begun: CNN’s Jim Acosta—and, ladies, find you a man who loves you like Jim Acosta loves Jim Acosta—admitted that he’d be covering Biden differently, explaining, “If being at the White House is not an experience that might merit hazard pay, … then perhaps it is going to be approached differently.”

Of course, Acosta never needed hazard pay. He was too busy declaring himself a hero and preening for the cameras while pulling down a lucrative book contract. But now that the Biden administration is a reality, our media can go back to sleep.

And so, the controversies of the day will turn to the trite. The big question won’t be governmental oversight but media self-policing: Last week, the media were consumed with the vital question of whether Vogue magazine’s cover of Harris is respectful enough, given that it shows her wearing her trademark Converse sneakers.

Other major controversies to come will include just how cute Biden’s dog is and whether the racial diversity of his Cabinet is merely important or super important.

Meanwhile, the same media outlets that act as stenographers for the Democratic Party will insist that other outlets meet with social media censorship. After all, American needs unity! And that unity can only be provided by the same people who have wrecked all pretense of institutional objectivity in the pursuit of partisan outcomes.

People will continue to seek information from alternative sources, of course. But that will only provoke the media to seek new methods of repressing those alternatives. As it turns out, the commitment of many in our media isn’t to truth or facts. It’s to monopolistic control.