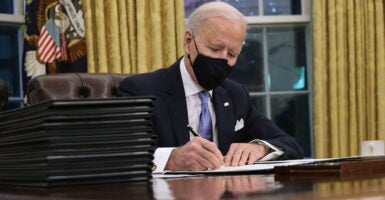 On his first day in office, President Joe Biden committed to removing the 1776 Commission's report, issued Monday, and to disband the commission. Pictured: Biden prepares to sign a series of executive orders in the Oval Office just hours after his inauguration on Jan. 20. (Photo: Chip Somodevilla/Getty Images)

All Americans should wish President Joe Biden well. To do otherwise would be churlish and self-defeating. It beggars belief, though, that one of his first intended acts was for his White House to take down the report issued Monday by the 1776 Commission, and on his first day as president, to disband the commission.

Is that really the priority? As one of the commissioners, I guess I’m flattered. But is the baying from the woke left so furious that dissolving a commission named after our nation’s founding, and deleting a report calling for teaching objective history, makes the top of the list?

The symbolism alone should give pause. But maybe the symbolism is the thing, and our new president wants to demonstrate his bona fides to the creators of the 1619 Project and their hard-left allies.

For the record, we commissioners intend to continue meeting and fulfilling the charges of our two-year remit. The Heritage Foundation will also continue to host the report, which you can henceforth find here.

The 1776 Commission’s chairman, Larry P. Arnn, president of Hillsdale College and member of The Heritage Board of Trustees, issued a statement along with Vice Chair Carol Swain and Executive Director Matthew Spalding, pointing out that the report merely called for

a return to the unifying ideas stated in the Declaration of Independence. It quotes the greatest Americans, black and white, men and women, in devotion to these ideas. The Commission may be abolished, but these principles cannot be. We will all continue to work together to teach and to defend them.

If we are to take the words of our new president at his inauguration seriously, as we must, the nation’s cup runneth over with challenges. “Few people in our nation’s history have been more challenged or found a time more challenging or difficult than the time we’re in now,” he said, before reeling off our litany of woes.

What would help us fend off these demons, he said, was unity: “We have never, ever, ever, ever failed in America when we’ve acted together.”

Lofty words, but as one of his predecessors used to say: trust, but verify.

By abolishing the commission, and banishing the report, Biden threw in his lot with critics that from the moment the report was issued covered themselves with ignominy as they raced each other to denigrate our work.

One of the worst examples of the media “coverage” was a CNN report whose headline actually screamed this libel: “Trump administration issues racist school curriculum report on MLK day.” In a breach of journalistic ethics (if those two words can still be written together), the body of the story did not bother to explain where in the report was there a hint of racism.

Ditto for USA Today, which had a straight up news report—not an opinion piece—with the breathless accusation that the report was a “document that excuses America’s history of slavery, derides the legacy of the civil rights movement and equates progressivism with totalitarianism.”

Ibram X. Kendi, the Boston University activist/professor who insists that racism on behalf of people he deems marginalized is not just welcome, but necessary and not actually racism, said this in a tweet: “This report makes it seems as if slave-holding Founding Fathers were abolitionists.”

It is not hard to understand why Kendi is so allergic to the Founders. He proposes a federal department of “anti-racism” that bars political appointees, and thus therefore believes in separating government from the consent of the governed, one of the key touchstones of the Founding.

On what the Founders believed, and more importantly what their contemporaries thought, I would rather rely on the words of the man who took up their work seven score and 10 years later.

“In the way our fathers originally left the slavery question, the institution was in the course of ultimate extinction, and the public mind rested on the belief that it was in the course of ultimate extinction,” Abraham Lincoln told Stephen Douglas on their famous Third Debate in 1858. “When this government was originally established, nobody expected the institution of slavery would last until this day.”

That is the work we recommended in the 1776 report, for historians to look at primary sources, analyze what they meant in the context of the time, debate that meaning in good faith, without an agenda, and be ready to correct the record when proven wrong.

To twist history to fit a political project is to write lies, which is why so many historians have criticized the 1619 Project, whose agenda is to make our America an object of contempt. The people who do this understand that Edmund Burke was ultimately right when he wrote, “To make us love our country, our country ought to be lovely.” And they want to do the opposite.

In pursuing the opposite from what Kendi and the others want, we in the commission prefer to heed Biden’s words, when he called in his inaugural address to “reject the culture in which facts are manipulated and even manufactured.”

This is why serious intellectuals on the 1776 Commission, such as Charles Kesler, Spalding, Swain, and Arnn, felt so strongly about our work, and why we will continue to carry it out.