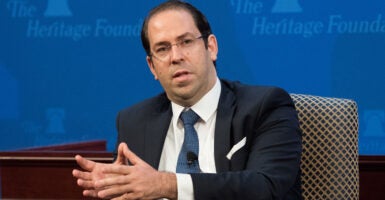 Jan. 14 will mark the 10th anniversary of the Arab Spring, which began with Tunisians’ toppling of longtime strongman Zine el-Abidine Ben Ali’s regime in 2011.

The Arab Spring, which swept North Africa and the Middle East, was a moment of hope that the region was moving toward a freer, more democratic future. Unfortunately, that hope has faded for most countries.

Tunisians have also suffered plenty of disappointment since then. Nonetheless, Tunisia remains a notable exception, as the country continues to pursue the democratic and economic goals of its revolution.

To be sure, Tunisia’s democracy is fragile and still developing, and the economic reform process has been difficult, to say the least.

As the World Bank summed it up, “Tunisia remains a country of contrasts: While important progress has been made on political transition toward an open, democratic system of governance, economic transition has not kept pace.”

In 2014, the country made massive strides, adopting a new constitution and then holding its first full parliamentary and presidential elections under that constitution.

As with any young democracy, Tunisia’s government continues to face daunting tasks. At the top of the government’s to-do list are revitalizing the economy and building the public’s confidence in a fledgling democracy.

That’s a tall order, and on the broader economic front, structural reforms must be carried out more decisively to show that democracy can bring measurable prosperity for the ordinary Tunisian.

According to the latest edition of The Heritage Foundation’s annual Index of Economic Freedom, Tunisia’s economic freedom score is 55.8 out of 100, making its economy the 128th-freest in the world. Its overall score has increased slightly due to an improvement in property rights and other rule-of-law indicators.

However, Tunisia’s political leaders and policymakers will need to continue working with the country’s civil society and youth population to make its economy work, particularly in the policy areas of market openness and regulatory efficiency.

For the Washington circle that makes foreign policy, Tunisia’s embrace of democracy makes the country a critical asset of untapped potential value. A steady and democratic Tunisia not only provides the U.S. with a strategic ally, but also serves as a model for future democracies in the region.

Since the January 2011 revolution, U.S. support for Tunisia has focused on targeted issues, including ensuring and enhancing internal and external security, promoting democratic practices and good governance, and supporting sustainable economic growth.

The success of Tunisia’s bottom-up pursuit of democracy and economic freedom will be a success for the United States, too.

In a 2015 Washington Post commentary, Kim Holmes of The Heritage Foundation made the case for Tunisia as a natural and important strategic partner for the U.S. in a region where stable, democratic allies are rare and critically needed.

Indeed, the United States has been a strong partner for Tunisia, one of America’s 17 major non-NATO allies, throughout its attempt to realize the promise of the Arab Spring.

Tunisia has fought ISIS and al-Qaeda terrorist groups effectively, even as neighboring Libya has been experiencing much more profound instability and economic collapse.

The world has drastically changed since 2011. Yet, a strategic and sustainable partnership between the United States and Tunisia remains critical to achieving a peaceful, democratic, and prosperous Tunisia that is a reliable and strong American ally in the midst of a tumultuous region.

Effective and strategic partners work together to make hard choices in tackling big problems and driving significant changes. That rings true for Tunisia’s relationship with America.