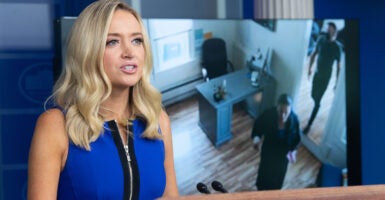 “We’re all in this together.”

At least, that’s what millions of Americans have heard for months from corporate advertisers, friends on social media, and, of course, from government officials.

If the behavior of our elected leaders is any indication, however, it would seem that many of them have chosen to live by another phrase: “You’re all in this together.”

For months, Americans have been treated to story after story of politicians and bureaucrats implementing restrictive coronavirus mandates or guidelines, only to be caught violating those mandates themselves.

Consider the case of Mecklenburg County Manager Dena Diorio. In a press conference before Christmas, she urged residents of the Charlotte, North Carolina, area to stay home for the holidays, before telling a reporter that she herself intended to travel across the state to be with family.

Or the story of Mark Eckert, mayor of a southwestern Illinois town outside St. Louis. He was caught dining indoors at a St. Louis restaurant after prohibiting that very practice in his town.

You would think that after a handful of these accounts made national news, our leaders would get the hint. At the very least, maybe they’d be more wary about flaunting their own edicts, or try harder not to get caught.

That’s why The Heritage Foundation recently launched “COVID Hypocrisy,” a comprehensive and interactive tool documenting cases of elected leaders and government officials violating their own coronavirus mandates and restrictions.

This tool is not about playing a political game of “Gotcha!” It is about protecting and restoring confidence in our governing institutions—a confidence that has been especially shredded by many leaders’ response to the coronavirus pandemic.

The American people are hardy and resilient in the face of any challenge. But after months of forced lockdowns, school closures, and lost livelihoods, they shouldn’t be asked to live by a set of rules that don’t seem to apply to those in positions of authority.

It’s not too much ask that these officials display the most basic sense of integrity. And it is only appropriate that we call them out when they stubbornly refuse to do so.

These violations of the people’s trust are far more damaging than just momentary blips of disgust or outrage on the public radar. They undermine our very institutions, and the American people’s confidence in them.

Perhaps at no other time has it been more important for Americans to trust our leaders and believe that they have our best interests at heart. Our world is only growing more dangerous, and the list of challenges we face at home and abroad only grows longer, not shorter.

If we truly wish to tackle those challenges and overcome what will no doubt prove to be formidable obstacles and adversaries, our officials will have to play a vital role in leading the country. Such leadership, however, is impossible without trust.

For guidance on how our leaders can rebuild trust with the American people, perhaps they should look to the father of our country, in whom they can find a shining example of leadership in difficult times.

Gen. George Washington, commander in chief of the Continental Army, famously spent the brutal winter of 1777-78 with his forces at Valley Forge, Pennsylvania. The fledgling American forces had to endure terrible and trying conditions for months.

Rather than try to lead the army from his beloved and comfortable Mount Vernon, Washington instead led by example, promising to “share in the hardship, and partake of every inconvenience” alongside his men, many of whom did not even have basic footwear or a coat to protect them from the elements.

Ultimately, the force that emerged from Valley Forge in the spring of 1778 was stronger, better trained, and more prepared to face the might of the British military—because Washington chose to lead, rather than exempt himself from the hardships shared by those in his charge.

Years later, Washington famously showed the humility we should demand of all those who would lead us, in surrendering his military commission to Congress after winning America’s independence from Britain in 1783, and later refusing a third term as president of the new United States—a term which was his for the taking.

The greatest hero of American history was humble enough to literally get down in the mud and ice with his men at Valley Forge and to decline easy opportunities for personal power, glory, and convenience.

Meanwhile, U.S. officials today visit restaurants they’ve closed to the public, then lie about it when caught.