No, Beijing, the Hong Kong Protests Were Nothing Like What Happened on Capitol Hill 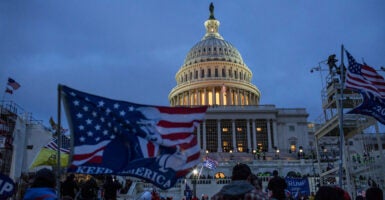 Despite false parallels being drawn by Beijing, the Capitol Hill riots that occurred on Wednesday have nothing in common with the Hong Kong protests of 2019 and 2020. (Photo: Probal Rashid/LightRocket/Getty Images)

False equivalencies are being drawn between the angry pro-Trump mob that sought to disrupt democratic processes on Capitol Hill this Wednesday and overwhelmingly peaceful, pro-democracy Hong Kong protests that took place in 2019 and 2020.

These parallels are being drawn intentionally and with malice by malign actors, like China and Russia, who seek to defend their own illiberal practices at home.

To even compare the two groups is to do the patriotic cause of the Hong Kong people a disservice. Hong Kongers took to the streets in 2019 to object to an extradition bill that would have permitted Hong Kongers to be extradited and tried in Beijing.

Protesters saw the bill as eroding the autonomy of the city-state, and seized on the political moment to press for universal suffrage (Hong Kong citizens can directly elect members of their Legislative Council—known in Hong Kong as the LegCo—but have no authority to directly elect the equivalent of their president, the chief executive).

Many saw the introduction of the bill as evidence that Beijing was interfering in the LegCo, and feared what greater interventions might mean for their autonomy.

Hong Kongers’ fears were confirmed when in 2020 Beijing introduced a new national security law that made it illegal to commit so-called sedition, foreign collusion, acts of secession, and terrorism as Beijing defines it. In many regards, this law ended the one-country, two-systems model it had been governed by since the British handover.

The new law has already resulted in the jailing of pro-democracy advocates Joshua Wong, Agnes Chow, and Ivan Lam, as well as prominent businessmen like Jimmy Lai. Just this week, more than 50 additional pro-democracy advocates have been called in for questioning and await sentencing, including an American lawyer and human rights advocate, John Clancey.

Hong Kongers foresaw their system of government, their institutions, crumbling before their very eyes and they took action to defend and preserve their freedoms.

What is more, they do not have the right to deface government property because their preferred candidate did not prevail.

Through their propaganda efforts, the Chinese government is trying to simultaneously delegitimize the Hong Kong people’s cause and assert its own system of government as superior to that of the U.S.

But it’s almost as if the Chinese government missed the second part of that fateful day. Rather than allowing for democracy to be derailed, both Democrats and Republicans returned to the same Capitol building that had been ransacked earlier that day to certify the election result and to restore order to our divided nation.

At the end of the day, the efforts of the mob failed in the face of strong institutions that protect all Americans regardless of who they voted for in 2020.

The people of China don’t have the privilege of choosing their candidates for leadership. It is the Chinese Communist Party that governs them, without their consent. Dissent—like protests in Hong Kong—is not tolerated. People cannot turn to their courts for a redress of violations of their civil liberties. They cannot vote their officials out of office. They cannot practice their most closely held beliefs as their conscience dictates.

America has always been a shining city on a hill, as Reagan affectionately called it – a beacon of liberty at home and abroad. Now, we must call upon our better angel’s that we might still enjoy the privilege and the duty of protecting, preserving, and promoting freedom and human rights.

The challenge for Americans is this: Can we lay aside our differences to preserve our more perfect union for ourselves as well as for those, like the Hong Kong people, who do not enjoy the cherished liberty of speaking for themselves?