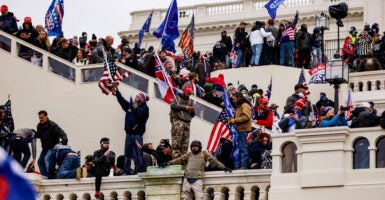 Metropolitan Police Chief Robert J. Contee III said during a press conference that as of Wednesday evening, police had made at least 52 arrests, 47 of which were the result of curfew violations and unlawful entry.

Twenty-six of the arrests were made on Capitol grounds, Contee said.

One woman was fatally shot by law enforcement, Contee said. She has been identified as Air Force veteran and San Diego resident Ashli Babbit by multiple news outlets.

The police chief said there were three additional deaths.

“One adult female and two adult males appear to have suffered from separate medical emergencies, which resulted in their deaths,” Contee said.

The police chief also said that police recovered pipe bombs both outside the Republican and the Democratic national committee headquarters and found a cooler in a vehicle on Capitol grounds that had a long gun and Molotov cocktails in it.

The Metropolitan Police Department did not immediately respond to a request for comment from the Daily Caller News Foundation.

D.C. Mayor Muriel Bowser said she is extending the city’s public emergency through President-elect Joe Biden’s inauguration Jan. 20, saying that she expects those who stormed the Capitol to continue protesting.

“Their motivation is ongoing,” Bowser said. “Today, they sought to disrupt the congressional proceedings relating to the acceptance of Electoral College votes.”

“President Trump continues to fan rage and violence by contending that the presidential election was invalid,” the mayor said.