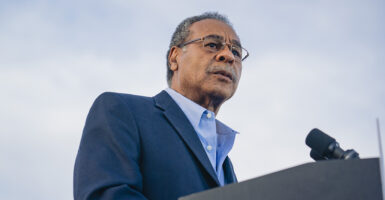 Is it “amen” or “awoman”? According to Democratic Rep. Emanuel Cleaver, it’s both. In a recent prayer before the United States House of Representatives, Cleaver, an ordained minister with a master’s degree in divinity from Saint Paul School of Theology, was reading a prepared prayer, and ended the prayer by saying “amen and awoman.”

From my perspective, this so-called prayer was utterly idiotic.

He said “and awoman” as if he were honoring the female gender because it had been denied for generations through the word “amen.” Anyone who has uttered a prayer knows it’s not gender-specific. It’s a term that means “so be it” or “let it be done,” and if anyone should know that, it’s a congressman with a degree in divinity. It is as if he’s lost all sense of what he learned from his theological training in seminary.

Why? To knowingly misuse a word to make a few folks feel good about themselves? No. We’re only adding more confusion by the falsehood of happiness and respect.

If you want to respect those who are truly different, focus on the economy, jobs, and infrastructure—the things that we all partake in as Americans, regardless of whatever differences we may adopt to separate ourselves from others.

I’m not even sure what I heard was a prayer. When a speaker acknowledges all things as a potential “God,” then he or she is essentially saying, “Come, let us worship creation, and not the Creator.” That’s religion made of man. And it’s counterfeit on every level.

We are falling further away from God and becoming more reliant on ourselves than we ever have in the history of this country. We observe the decay of our social institutions; it’s not hard to see why. Man is not all-knowing: God is. While man can manipulate life’s creation, it is God who creates life, and it would behoove us never to forget it.

Men who have ambition and power have one ultimate goal in mind, whether they or we want to admit it or not, and that is to replace God and forget His existence.

Nevertheless, we must question Cleaver’s true agenda. Why would a man of faith, an ordained minister, feel so comfortable confusing people by misusing a word he understands well as a result of training? Well, that answer is simple: He’s keeping up with others in his party who are advocating such virtue-signaling nonsense.

House Democrats are focusing on gender words instead of their actual jobs. To be frank, this should come as no surprise. Under the leadership of Speaker of the House Nancy Pelosi, the chamber proposed sweeping rule changes for gender-neutral terms in its official language.

Yes, you read that correctly: The men and women you elected to manage the nation’s most critical issues are more concerned with gender terms than the nation’s infrastructure or a healthy economic stimulus for struggling Americans and small business owners. Now we can all see clearly what’s going on inside the secret, smoke-filled rooms.

Congress only cares enough to appease us, which is what we knew all along. During this foolery, Americans fall into the abyss of economic hardship and poverty.

If this is where we’re headed, the road ahead of us is long, dark, and likely irreversible if we don’t turn around. Congress has one job and one job only, and that is to operate a functional government that serves the interests of the people and the nation. They are to keep the budget low, prioritize our national security, and adhere to the values and principles that define who we are.

But that is not what our current government is doing. It’s a government elected by the people but in service of itself, and that is something we must never stand for and must instead outright reject.