Honoring How Our Deployed Troops Keep Us Safe 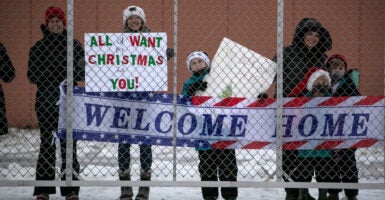 Family members greet U.S. Army soldiers returning home from a nine-month deployment to Afghanistan on Dec. 10 at Fort Drum, New York. The troops were replaced in Afghanistan by a smaller force, as the U.S. military continues to reduce troop levels there. (Photo: John Moore/Getty Images)

Like a zombie, the notion that America is fighting “endless” or “forever” wars in the Middle East refuses to die.

It’s a theme not reserved to a single political party: President Donald Trump, a Republican, in his 2019 State of the Union address stated that “great nations do not fight endless wars” and directed recent Middle East troop withdrawals, while former Vice President Joe Biden, a Democrat, in his campaign materials called for the “end of forever wars in Afghanistan and the Middle East.”

It’s a topic the Foundation for Defense of Democracies, a Washington think tank, critiqued this month in a well-articulated report, “Defending Forward: Securing America by Projecting Military Power Abroad.”

U.S. troops have indeed been in Afghanistan for a long time, starting a month after the 9/11 attacks and remaining to this day. However, the mission for U.S. forces in Afghanistan—like those in Iraq, Syria, and Somalia—is not to “fight wars,” but rather to conduct counterterrorism operations, assist local security forces, and above all, prevent an attack on the U.S. from originating in these countries.

Portraying their missions as “fighting wars” perpetuates a dangerous myth and plays on emotions when, in fact, rational thinking is what is needed.

In 2008, there were some 190,000 U.S. troops deployed in Iraq and Afghanistan fighting insurgents. Today, that number is about 7,000 and going lower still.

The roughly 4,500 troops in Afghanistan, 2,500 in Iraq, less than a thousand in Syria, and 700 in Somalia serve our interests by performing key security roles, none of which involves fighting a war.

While those forces operate in what are essentially war zones, the U.S. mission in each of these countries is to assist the local forces become more proficient and to conduct select counterterrorism missions, taking out the worst actors before they can harm U.S citizens and interests.

America’s complete withdrawal from Iraq in 2011 provides the textbook example of what happens when U.S. forces prematurely depart. The ISIS caliphate quickly filled the vacuum, and it took years, thousands of innocent lives, and billions of dollars to roll it back.

Throughout its long history, America has had isolationists, thinking we were better off ignoring what was happening in the rest of the world.

In President George Washington’s 1796 farewell address, he cautioned “foreign influence is one of the most baneful foes of republican government” and, for the most part, his warning was heeded.

For the first 150 years of our nation’s history, remaining apart from global engagement was our unofficial foreign policy, only briefly interrupted by the Spanish-American War and World War I.

After World War I, the U.S. quickly retreated back to its own shores, content to let Europe deal with Europe, even declining to participate in President Woodrow Wilson’s brainchild, the League of Nations, fearful of entanglements and commitments.

After seeing both Europe and the Pacific go up in flames in World War II, American leaders such as Gen. George Marshall and President Harry Truman realized isolationism was no longer in the nation’s best interest.

Thus, the American military remained past the end of conflicts in South Korea, Germany, Italy, Japan, and more recently in the Balkans, maintaining influence and touchpoints, deterring aggression, and contributing to general global stability.

The relative peace that ensued following the collapse of the Soviet Union in 1991 has, in many cases, lulled Americans into the belief that war is a remote thing of the past.

The Foundation for Defense of Democracies study referenced above reminds us that of the previous 3,421 years of history, only 268 have been free from war. Remaining engaged overseas helps reduce the risk of future war.

Does the presence of U.S. forces assist those countries? Undoubtedly. But their presence also benefits the U.S. by contributing to the maintenance of a peace that has largely been unbroken since 1953 and contributed to the generation of trillions of dollars of U.S. wealth and prosperity.

That said, complete peace remains elusive in Afghanistan, Iran, Syria, or Somalia. U.S. forces located in those countries are unquestionably in harm’s way. Casualties still tragically occur. Nevertheless, helping those countries develop adequate security forces of their own and maintaining the freedom for U.S. forces to conduct counterterrorism operations to neutralize threats before they threaten serves our direct national security interests.

Those operations are no more fighting “endless” or “forever wars” than the 600 or so Americans deployed as part of NATO’s Kosovo Force in the Balkans are fighting an “endless war.”

Does that mean regional commanders get a blank check for as much time and money and as many forces as they want? Clearly not.

In his 2017 speech announcing his Afghanistan strategy, Trump got it right. After declaring that “conditions on the ground—not arbitrary timetables—will guide our strategy,” he went on to make clear “our commitment is not unlimited, and our support is not a blank check. The government of Afghanistan must carry their share of the military, political, and economic burden. The American people expect to see real reforms, real progress, and real results. Our patience is not unlimited.”

That is the correct lens through which to view the commitment of U.S. forces.

In the aftermath of the 9/11 attacks, President George W. Bush established a goal for the United States to “defend the United States, the American people, and our interests at home and abroad by identifying and destroying the threat before it reaches our borders.”

While it might be appealing to withdraw our remaining overseas military presence and to figuratively pull up the drawbridge, Bush’s laudable goal cannot be accomplished that way.