A Pastor’s Misguided Attack on Israel 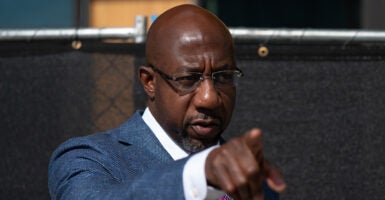 Raphael Warnock chooses to zero in on Israel, the very model of success through personal responsibility, as a problem. Pictured: Warnock gestures to a staffer Oct. 21 after casting his ballot at State Farm Arena in Atlanta. (Photo: Elijah Nouvelage/Getty Images)

What would our nation look like if every day, every American—of every background and ethnicity—were to wake up with the conviction that they are 100% responsible for the circumstances of their lives?

No blame, no victimhood, no excuses saying that what is happening to them is because of someone else.

It touches, I believe, the heart of Christianity.

We have faith in a loving God who wants us to take responsibility, and when there is failure, there is forgiveness and another chance.

Too many in our country are paying a great price by listening to politicians on the left who are telling them the opposite.

Consider the Rev. Dr. Raphael Warnock, senior pastor of Ebenezer Baptist Church in Atlanta, who is now running as a Democrat in one of the two U.S. Senate runoff elections in Georgia.

Warnock, who is black, is a poster child of the left, which embraces the view that the world is unfair, controlled by racists and exploiters.

And for some reason, Warnock, like so many of this point of view, chooses to zero in on Israel, the very model of success through personal responsibility, as a problem rather than a solution.

Just last year, after visiting Israel, he affixed his signature to a Group Pilgrimage Statement on Israel and Palestine.

That statement identifies Israel as an “oppressive” regime, accuses Israel of segregation, speaks of militarization “reminiscent of the military occupation of Namibia by apartheid South Africa” and of “excessive use of force” by Israel in Gaza.

These total distortions of the truth in service of a left-wing political agenda should be a wake-up call.

Regarding the reality of Israel, we can turn to the nonpartisan organization Freedom House in Washington, D.C., which annually rates 210 nations around the world as being “free,” “partly free,” or “not free.”

Israel is the only nation in the Middle East rated “free.”

But Warnock and his colleagues ignore oppression throughout the region and only choose to attack the one country that is free.

This freedom is enjoyed not only by the Jewish citizens of Israel but also by the nearly 2 million Arab citizens of the country. In my first visit to Israel, I couldn’t help but notice the amazing diversity, with Jews from all over the world—white, brown, and black.

Regarding the situation in the West Bank and Gaza, where Palestinian Arabs live, their absence of freedom and prosperity is their own choosing. They control their future, not Israel. Rather than aspiring to build better lives for their citizens, they choose regimes that set a priority to destroy Israel.

In 2005, for example, Israel unilaterally withdrew its presence from Gaza. The Palestinian regime there was free to start building a nation. Rather than doing this, it started lobbing missiles into Israel. The Palestinian Authority prime minister announced, “We are telling the entire world: today Gaza and tomorrow Jerusalem.”

Israeli settlers who were displaced when Israel withdrew moved inland, started irrigating the desert with desalinized water, and, within five years, were exporting $50 million worth of organic potatoes, carrots, and peppers a year.

I wrote about it then, quoting the late Art Linkletter, television personality and outspoken Christian, who observed: “Things turn out best for people that make the best of the way things turn out.”

I said then that Linkletter’s observation captured why Israel has grown and prospered and why Palestinians have languished.

The same is true in America.