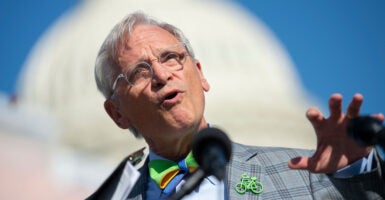 Rep. Earl Blumenauer, chairman of the House Ways and Means trade subcommittee, introduced legislation this week that would renew a trade program that eliminates tariffs on certain products from developing countries.

Americans save roughly $1 billion annually in tariffs on imports, thanks to the Generalized System of Preferences, but the program is currently set to expire on Dec. 31.

The Generalized System of Preferences is a trade program that works for Americans and for the developing countries that benefit from it.

Lapses in the program cost American businesses thousands of dollars per month. Especially during a time of immense economic uncertainty, it’s crucial that the Generalized System of Preferences is renewed before the end of the year and that it’s not held up by last-minute calls for major changes.

Congress typically renews it for a period of two years, but this new legislation would renew it only for an additional six months.

The legislation from Blumenauer, D-Ore., also attempts to make major, 11th-hour changes to the program. It would require beneficiary countries to meet additional human rights, rule of law, governance, and anti-corruption standards, while also adding new labor and environmental requirements.

In effect, the savings that American businesses and families enjoy through the Generalized System of Preferences are being held hostage by a liberal wish list, and many of the proposed changes are unrelated to trade.

Many of the proposals would increase regulations and barriers for developing countries and harm producers abroad as well as American consumers.

To be clear, opportunities exist to improve the Generalized System of Preferences. In a recent report, The Heritage Foundation recommended extending it for the long term and expanding program coverage to apparel and textile products.

Any proposed changes should continue to promote the widespread use of the Generalized System of Preferences, not decrease trade between the U.S. and developing countries. However, modifications to the program should not be done at the 11th hour, when there’s little time for members to conduct thoughtful debate on the issue.

Specifically, the Generalized System of Preferences exists to increase trade and accomplish those goals of higher levels of prosperity and stronger economies.

While that’s not a full two-year renewal, the proposal does not contain any last-minute policy riders that would negatively affect the program.

A clean renewal of the Generalized System of Preferences would help to provide certainty for American businesses. It would also allow Americans to continue to benefit from this cost-saving program.

While some changes to the Generalized System of Preferences should be considered, such as expanding the program’s coverage, making major changes just weeks before it’s set to expire is not appropriate.

Congress should renew this trade program as soon as possible and allow time for constructive debate on various reform proposals in the new Congress.