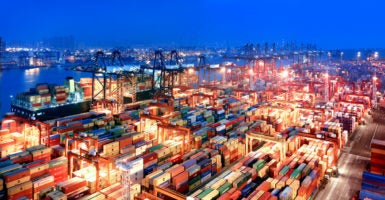 China is one of America’s top trading partners, but this status is sinking due to the effects of the trade war and tariffs. (Photo: xPacifica/Getty Images)

HyunJoo Lee is a former Asan fellow in the Asian Studies Center at The Heritage Foundation.

Relations between the U.S. and China are increasingly icy, and justifiably so given China’s mishandling of COVID-19 and its undermining of Hong Kong’s autonomy.

However, even as overall tensions rise, it is important to remember that the trade dispute between the U.S. and China continues to take a toll on the U.S. economy and the pocketbooks of Americans.

As Americans fight to get back to work after the coronavirus-related shutdowns, the government should unleash the power of the free market by removing barriers to trade.

Since 2018, the tariffs on imports from China have cost Americans more than $49 billion, a cost which grows each day.

Similarly, a new report from the National Bureau of Economic Research found that tariff actions against imports have a cooling effect on the investment growth rate of publicly traded companies.

As the U.S. looks to make an economic recovery after COVID-19, it is crucial that policymakers remember the important role that trade, including trade with China, will play.

After all, China is one of America’s top trading partners. China was ranked No. 1 until 2019, when it dropped down to No. 3 due to the effects of the trade war and tariffs.

China is still the leading source for imports, but total imports fell by more than 10% between 2017 and 2019. Americans also exported 18% less to China over the same period.

Not only have tariffs on imports from China increased costs for American businesses and families, there are broader consequences to decreased bilateral trade between these two countries.

For example, port and freight industries are negatively impacted when there are fewer products crossing the Pacific. This in turn affects logistics like truckers and railways. Simply put, less trade leads to fewer things to move and less work for these important service industries.

The U.S. trade deficit with China is at a three-year low, but lowering the trade deficit through tariffs resulted in overall trade falling. According to The Wall Street Journal, “lower imports of consumer goods could point to waning consumer demand, a negative signal since household spending is core to U.S. growth.”

The trade deficit is a poor measure for the health of an economy or quality of a bilateral trading relationship. Focusing on the trade deficit assigns all of the gains from trade to exports and fails to realize the full gains of free trade.

Expanding protectionist laws and imposing more barriers is not a strategy that will aid America in its economic recovery. The same can be said for maintaining the status quo with average tariff rates nearly twice what they were in 2017.

Here are three ways Congress and the administration could unleash the power of free trade to benefit Americans:

It is without a doubt crucial to hold China accountable for its wrongdoings. But Congress and the administration should ensure that Americans retain their freedom to trade with people around the world at the same time.

After all, it is our free-market system that will lift Americans out of this economic malaise.