Japan Dodged a COVID Bullet … Or Did It?

Maybe Nature Shouldn’t Be Worshipped After All

America Needs to Lead the Way in Free Trade 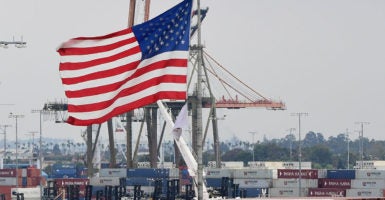 The U.S. flag flies in the foreground as containers are seen at the Port of Los Angeles June 18, 2019, in San Pedro, California. (Photo: Frederic J. Brown/AFP/Getty Images)

Derek Hosford is a member of the Young Leaders Program at The Heritage Foundation.

The United States is not doing enough to promote free trade and the elimination of trade barriers around the world. In fact, it’s doing just the opposite and imposing barriers on billions of dollars’ worth of imports.

The latest figures present a worrisome and unpredictable climate that is harming the overall health of world trade.

World Trade Organization Director-General Roberto Azevêdo responded to these figures by stating: “The message of the report before us is very serious. These actions have real economic effects, and the alarm bells are already sounding.”

At the same time, Azevêdo encouraged nations to resolve tensions that were negatively affecting trade growth around the world.

According to the report, and to no surprise given the continued tensions between the U.S. and China, G-20 countries were the primary culprits.

The United States itself contributed greatly to the increase in restrictions on global trade.

According to the Council of Economic Advisers, “Tariffs implemented in 2018 raised the U.S. average applied tariff rate by 1.1 percentage points, from 1.5 percent in January 2018 to 2.6 by November 2018.”

The 2019 Economic Report of the President says the administration is aiming at “zero tariffs, zero nontariff barriers, and zero subsidies” in trade between nations. If the goal is free trade, the strategy to achieve that goal should not be to add more restrictions.

Slower trade growth this year is expected as a result of the increase in restrictions and expectations for trade expansion are at the weakest levels since March of 2010. Trade growth is anticipated to slow to 3.7% this year, from 3.9% growth in 2018.

The slowdown should serve as a signal that fighting trade wars with tariffs is not a strategy beneficial for anyone, and the U.S should abandon this tactic.

The Trump administration needs to eliminate the tariffs imposed thus far, and instead focus on expanding free trade through new free trade agreements with key partners.