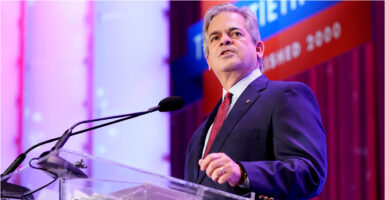 The mayor of Austin, Texas, flew private to Cabo San Lucas, Mexico, where he filmed himself telling citizens to “stay home.”

Austin Mayor Steve Adler hosted 20 guests at an outdoor wedding and reception for his daughter at a hotel in downtown Austin in early November, the American-Statesman reported. The following day he boarded a private jet with seven of the wedding guests and flew to Cabo San Lucas, Mexico, for vacation at the family timeshare.

“We need to stay home if you can,” Adler said in a Facebook video message to Austin residents. “This is not the time to relax. We are going to be looking really closely. … We may have to close things down if we are not careful.”

Adler filmed the Facebook video message from Mexico, one night into the trip, the publication reported.

EXCLUSIVE: Austin Mayor Steve Adler told the public to “stay home if you can…this is not the time to relax” in a Nov. 9 Facebook video. He did not disclose that he was at a timeshare in Cabo San Lucas after flying on a private jet with eight family members and guests. pic.twitter.com/w1uZahGfpM

The mayor told the American-Statesman that his family carefully considered how to host the wedding and vacation safely and consulted interim health director Dr. Mark Escott before the wedding.

Guests underwent rapid COVID-19 tests and social distanced, he told the publication, though he said the guests were “probably not” wearing the masks that were distributed.

“At that point, I am with my family group and people who just tested,” Adler told the publication. “It is not perfect. Obviously, there are infections that could happen, but I think all of us should be minimizing risks as best we can.”

Escott, the interim health director, said at a press briefing the day after the mayor’s party went to Mexico: “If you’re going out to a restaurant, go out with your family, the people who live in your household, not with family and friends outside your household and start to decrease those travels outside of your home that are not necessary.”

The mayor also told the publication that he did not violate his regulations and his actions were not inconsistent with his message at the time. Adler did not immediately respond to a request for comment from The Daily Caller News Foundation.

“Everyday since March, I repeat that being home is the safest place for people to be,” Adler said in a Wednesday statement, according to the American Statesman. “Only at our most trying moments, like around Thanksgiving, have I asked people not to travel as part of extra precautions. It is safest to stay home. However, we aren’t asking people to never venture out. We ask everyone to be as safe as possible when they do.”