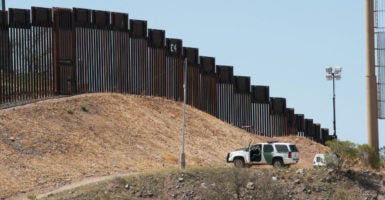 In March 2017, border apprehensions declined by 64 percent from the same month in the previous year. (Photo: iStock Photos)

The month of March brought with it the lowest number of apprehensions along the U.S. southern border since at least the year 2000.

This decrease can be credited to the strict enforcement policies that have been put in place since President Donald Trump took office, coupled with the now-credible threat of deportation that illegal immigrants face.

In March of 2000, there were 220,032 illegal immigrants apprehended trying to enter the United States illegally. Over the years since the year 2000 (the first year that monthly statistics are available), the number of apprehensions on the southwest border has been in an overall decline, despite fluctuations that have occurred over the years.

Seasonal fluctuations occur every year, but in February and March of this year, the dramatic decrease of apprehensions has captured the attention of many.

The month of March showed a decrease of 64 percent in apprehensions from the same month in 2016, and a 30 percent decrease since just February of this year. Apprehensions are generally viewed as the best metric of how many illegal immigrants successfully crossed the border.

The timing of these decreases is not a coincidence. The policies that have been implemented since Trump took office have caused many to rethink the risks that they are willing to take in order to come into the United States illegally.

By moving to end policies such as the so-called “catch and release” approach to immigration enforcement, Trump has sent a strong message to those who would enter and remain in the U.S. illegally.

Beyond these actions at the border itself, Homeland Security under Trump is also restoring interior enforcement of U.S. immigration laws.

Homeland Security is looking to expand 287(g) agreements, which allow state and local law enforcement agencies to volunteer to be trained and deputized to enforce federal immigration law. The department has announced that it will arrest and prosecute those who pay smugglers to bring children or other illegal immigrants across the border.

In addition, Immigration and Customs Enforcement (ICE) agents are no longer being forced to turn a blind eye to illegal immigrants they encounter in the U.S., but can now do their jobs and enforce the nation’s immigration laws.

In short, the drastic decrease in apprehensions along the southern border is due to enforcement throughout the United States. For many who would become illegal immigrants, it is apparently no longer worth braving the dangerous trek across the border because they are no longer sure that they will be overlooked by immigration officers.

While more remains to be done in the U.S. interior, at our borders, and in countries and regions that are sending illegal immigrants, the revitalization of immigration enforcement is a critical foundation for future immigration policies.