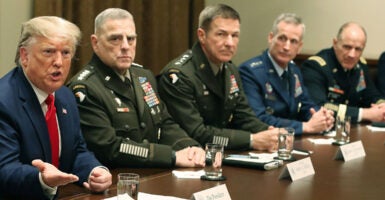 If lawmakers cannot come to an agreement on defense spending that can be signed by President Donald Trump, they will have to restart the process anew in the next Congress. Pictured: Trump speaks to reporters Oct. 7, 2019, after being briefed by senior military leaders in the Cabinet Room at the White House. (Photo: Mark Wilson/Getty Images)

The top two items on the agenda in the waning days of the 116th Congress should be to pass appropriations bills to keep the government from shutting down Dec. 11 and to agree on the 60th annual National Defense Authorization Act.

Thornberry, ranking member of the House Armed Services Committee, outlined the need to provide on-time defense appropriations that grow 3% to 5% annually above inflation until the Defense Department has rebuilt its capabilities.

The Texas Republican also stressed that Congress’ use of continuing resolutions, such as the one funding the government until Dec.1, have been quite damaging to our national defense.

Thornberry discussed the importance of maintaining the unbroken streak in which Congress annually passes the National Defense Authorization Act.

The bill has passed each year since 1961, one of the few authorization bills that are still done yearly. It designates the agencies responsible for national defense, sets funding levels, and lays out related policies.

Thornberry said the legislation shows our adversaries, our allies, and the men and women in uniform that the country stands together in support of its commitments and keeps its promises.

This stability, derived from consistent congressional action, is indeed a major advantage that democratic societies have over autocratic governments such as China and Russia. Thus, it is imperative that the lame-duck Congress build on this advantage by coalescing around the National Defense Authorization Act.

The extremely charged political environment marked by a close presidential election conspired against a swift conference between the two chambers and passage of a harmonized version of the bill earlier this year.

However, now the clock is ticking. The 116th Congress will end Jan. 3, when any pending legislation will die. Between now and then, some major holidays will reduce the working days of the legislative calendar.

Fortunately, the formal process of harmonizing the bill through a bicameral conference started Wednesday, giving hope that the process will be finalized on time.

If lawmakers cannot come to an agreement on a bill that can be signed by President Donald Trump before then, they will have to restart the process anew in the 117th Congress.

When the new House and Senate convene in January, some new members will be seated on each chamber’s Armed Services Committee, not to mention that Thornberry must be replaced with a new ranking member because of his retirement. These processes, even if they go smoothly, will take substantial time.

The best outcome for the nation and for the men and women of our armed forces is for Congress to come together and pass a National Defense Authorization Act for the fiscal year that began Oct. 1, one that can be swiftly signed by the president.

With little time left on the calendar, Congress should not waste it.