Mexico’s Efforts to Undercut Oil Competition Should Concern US Policymakers 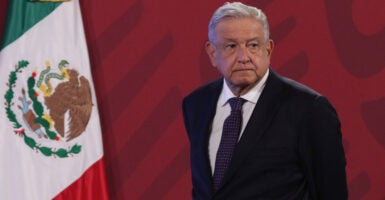 Bernard Zitzewitz is a student at Villanova University and a member of the Young Leaders Program at The Heritage Foundation.

A recently revealed memo from the president of Mexico, written by Mexican officials, highlights a deepening of statist economic policy in that country.

While Lopez Obrador’s oil nationalism is well-known, this latest development could undermine the spirit of the recently signed U.S.-Mexico-Canada Agreement and hamstring foreign investments in Mexico.

In response, a bipartisan and bicameral letter from members of the U.S. Congress to President Donald Trump highlights the urgency of this situation, claiming these threats “violate and contradict the spirit, if not the letter, of the USMCA.”

The U.S.-Mexico commercial relationship is profound, as Mexico is the U.S.’ largest trade partner, the largest export market for U.S. petroleum, and a growing destination for American-produced natural gas.

Abandoning a rules-based approach would undermine economic prosperity on both sides of the border.

The coming into force of the USMCA in July of this year was a great step forward in U.S.-Mexico relations, but this trade agreement is only as good as the participants’ ability to enforce it.

U.S. policymakers must remain concerned about promoting North America’s economic prosperity and opportunities for U.S. energy companies. It is key that they recognize the importance of ensuring that all energy companies operating in Mexico are allowed to operate on an even playing field.

Mexico has already moved to consolidate control over its energy sector, which could potentially erase billions of dollars in nonhydrocarbon energy investments, as well as tens of thousands of jobs.

Because the infrastructure necessary for oil production takes a long time to develop, a successful oil industry requires a steady stream of long-term investment and a stable business climate.

Although Lopez Obrador views increasing foreign investments during the first quarter of 2020 and in the previous year as an indicator that business confidence is steady, the vast majority of those investments have been merely rolled over from previous years.

It is misguided to pursue energy self-sufficiency by eliminating competition. Investment capital is needed to extract oil and build the refineries necessary to meet demand to produce diesel and gasoline.

Fostering free competition exempt of government-promoted nationalism is the best way to ensure that those products are produced at the lowest possible cost for consumers and that energy supply meets the needs of consumers, both in Mexico and abroad.

If U.S. trade deals are subject to arbitrary political whims, hard-won progress will be lost before anyone sees the benefits of the agreement.

Despite their ideological differences, Trump and Lopez Obrador have built a strong working relationship. However, fostering a strong bilateral relationship for the future will require the U.S. to continue to reaffirm these ties by enforcing the terms of the USMCA.

The issue of oil nationalism looms over the bilateral relationship as a potential hindrance and could affect cooperation in other areas, such as security.

Strong investment and trade will be central to economic recovery for both countries, and the volatility created by oil nationalism in Mexico will only serve to compound the uncertainty of the situation.

As U.S. policymakers look toward the future, the successful enforcement of the USMCA as it applies to the energy sector will be crucial to the region’s COVID-19 economic recovery.