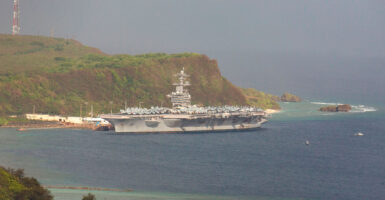 For the next several years, the U.S. is going to have to make some tough decisions in areas related to its foreign policy and national security commitments.

Fortunately, there’s one easy call to make. Invest in the Pacific islands; in particular, the Federated States of Micronesia, the Marshall Islands, and Palau.

As consultations get underway to extend the agreements that codify their special relationships with the U.S., Congress should steep itself deeply enough in the details that it can expeditiously approve them when the time comes.

The U.S. is a resident power in the Western Pacific. That’s not just because governments in the region—most notably, Japan and South Korea—host its forces, nor because the U.S. Navy is a constant and (to all except China and North Korea) reassuring presence.

It’s “resident” because Guam, the Commonwealth of the Northern Mariana Islands, and American Samoa are part of the United States. Voters there send representatives to Congress and participate in presidential primaries.

On Guam, the U.S. operates Naval Base Guam and Andersen Air Force Base. The naval base is home port to four Los Angeles-class attack submarines and the U.S. Navy’s submarine tenders. Andersen hosts U.S. bombers, including B-1s, B-2s, and B-52s when they deploy from the United States.

Guam, already home to a total of about 7,000 military personnel, is gaining more as a result of a restructuring of U.S. forces in Okinawa, Japan—a move largely paid for by the Japanese government.

Americans know the Northern Mariana Islands best by the names of its two principal islands, Saipan and Tinian. Saipan was the site of a critical World War II battle that cost 3,000 Americans and 27,000 Japanese their lives. Tinian is the place where the atomic bombs dropped on Hiroshima and Nagasaki were loaded.

What makes these islands so important today is what made them so important then; namely, geography. They are a part of the “second island chain”—a line of territories that runs from Japan to Papua New Guinea.

The U.S. presence there prevents the islands from becoming steppingstones for China’s global ambitions, while farther south, American Samoa stands between the U.S. and its security treaty ally Australia.

In addition to these parts of America—and other unpopulated bits of territory sprinkled through the Pacific—the U.S. also has special relationships with three sovereign island nations in the region—Micronesia, the Marshall Islands, and Palau. These Pacific Freely Associated States were directly administered by the U.S. after World War II as trusts of the United Nations. Today, they are connected to the U.S. by Compacts of Free Association.

Under these compacts, the U.S. military is free to both operate on the islands, as well as to deny other countries’ militaries access to them. It’s also obligated to defend them.

Like American Samoa, the Marshall Islands sits along key logistics routes between the U.S. and Asia/Australia. The Ronald Reagan Ballistic Missile Defense Site, which the U.S. Army houses there, is the “world’s premier range and test site for intercontinental ballistic missiles and space operations support.”

Palau and Micronesia are of similar geographical importance. Palau, in fact, is part of the aforementioned “second island chain.” The U.S. is working with it to provide the technology and training it needs to better monitor ship traffic in its neighborhood. And early this year, the Palauan president offered to host U.S. military bases, hospitality that cannot be taken for granted in an area of the world at the center of U.S.-China competition.

In Micronesia, the U.S. is planning a divert airfield for use as a substitute for Guam when necessary.

In exchange for these geostrategic gems, the U.S. spends less than $300 million in assistance a year, a small amount compared with American military and diplomatic budgets.

The compacts, however, are expiring soon—in 2023 in the cases of the Marshall Islands and Micronesia and 2024 in the case of Palau.

Its commitment to the Freely Associated States was best symbolized by a 2019 meeting at the White House, the first among the president of the United States and his counterparts from the three island democracies.

The importance to the U.S. of the Pacific islands ebbs and flows with history. At the turn of the 20th century, they became key nodes in America’s emergence as a great power, as it established a Navy worthy of its new status. In the mid-20th century, they were central to the war with Japan for control of the Pacific. Now, they are emerging in the geostrategic competition between the U.S. and China.

Aligned with the U.S., they restrain China. Aligned with China, they would enable its ambitions to displace the U.S. from the region.

The U.S. territorial presence in Guam, the Northern Mariana Islands, and American Samoa is a given. The Compacts of Free Association require political decisions in Washington to continue in force. As Congress approaches those decisions, they should fully account for a tremendous bargain American relationships with the Freely Associated States really are.