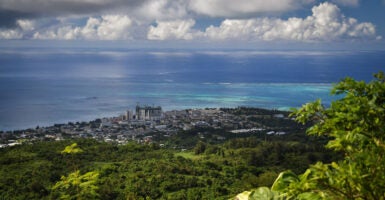 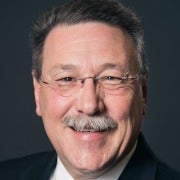 Douglas W. Domenech is the Interior Department’s assistant secretary for insular and international affairs and U.S. co-negotiator for the Compacts of Free Association

The Freely Associated States in the Western Pacific aren’t well known to many Americans, but President Donald Trump and his administration continue to provide unprecedented focus and support to these allies to help preserve their peace and prosperity in the face of China’s growing interests in the region.

Instead of debt diplomacy, the Trump administration wholeheartedly backs the democratic independence of the Freely Associated States, which include the Federated States of Micronesia, the Republic of the Marshall Islands, and the Republic of Palau. At the same time, the administration provides critical aid in health care, education, and infrastructure for their citizens.

The Trump administration has taken historic and extraordinary actions to demonstrate the U.S. relationship with and commitment to each of these nations—more than any previous administration since World War II.

No previous American president has met together with the presidents of the Federated States of Micronesia, the Marshall Islands, and Palau, as Trump did last year in the Oval Office.

Although these Pacific island nations have been strategically vital to the United States since 1947, even before they had become independent, no U.S. president had invited their heads of state to the White House for a joint meeting.

By holding such a historic meeting, Trump underscored his commitment to these nations and their people while highlighting his focus on a free and open Indo-Pacific region.

The president’s vision of American national interest and security is shaped by what he sees when he looks west beyond our Pacific shores to Americans living in the three Pacific U.S. territories of American Samoa, Guam, and the Commonwealth of the Northern Mariana Islands, juxtaposed with an increasingly aggressive communist China.

Defense Secretary Mark Esper visited Palau in August, the first defense secretary to do so. He is the fourth Cabinet member to visit the region and the third to visit the Freely Associated States in the last year or so.

At last year’s Pacific Islands Forum Partners Dialogue in Tuvalu, Interior Secretary David Bernhardt assured friends and would-be adversaries: “The United States is a Pacific nation, and our country has a deep and longstanding commitment to the future security, prosperity, and well-being of the region.”

America’s historic ties to the Pacific were forged in World War II, when over 110,000 Americans died and another 250,000 were wounded defeating Japan. Americans in Guam and the Philippines suffered atrocities under a foreign invasion of U.S. soil during the war.

Seventy-five years ago, the U.S. was present on hundreds of islands in the Pacific across a 3 million-square-mile region known as Micronesia, comparable in size to the continental United States. Under a 1947 “trusteeship agreement” with the United Nations, the U.S. agreed to promote social, economic, and political freedom and development in these islands.

In that perspective as “family,” Trump has sent millions of dollars in assistance to U.S. territories and the Freely Associated States to help prepare for and respond to the coronavirus pandemic and its impact. Such funding has purchased testing materials and personal protective equipment and helped prepare health care facilities.

For the past 35 years, the United States has maintained a close political, economic, and mutual defense alliance with these three Pacific island nations under a Compact of Free Association—with certain provisions scheduled to expire in 2023 for the Federated States of Micronesia and the Marshall Islands, and in 2024 for Palau.

Renewing the expiring provisions and strengthening these compact agreements are key to Trump’s Indo-Pacific strategy, and the process is underway to conclude negotiations as soon as possible.

Fortunately, two of the three Freely Associated States—Palau and the Marshall Islands—diplomatically recognize Taiwan instead of China, and Taiwan has helped ensure they have access to health support and financial assistance during the coronavirus pandemic.

Taiwan also contributes to the Compact Trust Fund for the Marshall Islands in a strong show of solidarity for that nation’s sovereignty in partnership with the United States.

However, China continues to pressure Taiwan’s diplomatic allies to abandon their democratic partnerships in Taipei. Beijing attempts to use government-controlled businesses to infiltrate and exert economic and political influence in the Freely Associated States and elsewhere, through predatory lending and foreign interference in their democratic processes.

Pompeo recently repudiated Beijing’s illegal maritime claims in the South China Sea, noting that the communist regime’s “predatory worldview has no place in the 21st century.” Pompeo also stated that Reagan’s advice to “trust but verify” should now be “distrust and verify” when it comes to China.

Although island leaders welcome investment, they assuredly must be aware of Beijing’s record on the rights of Indigenous peoples once China gets control. Individuals around the world are also aware of the harsh religious persecution that the Chinese face within their own borders.

Palau is well aware, having partnered with the U.S. to provide a safe haven to several Uighur Muslims. Americans join their brothers and sisters in the Pacific in praying for Christians, Uighur Muslims, and others in China. We cannot turn a blind eye to the severe persecution that our brothers and sisters suffer daily at the hands of the Chinese Communist Party’s brutal war on religion.

This unique model of successful partnership and free association in the Pacific was best expressed in the communique from Trump and the three heads of state after their Oval Office visit, which said they agreed to

jointly reaffirm our interest in a free, open, and prosperous Indo-Pacific region. We recognize our unique, historic, and special relationships, and reaffirm our countries’ commitments to the Compacts of Free Association, resolving to continue our close cooperation in support of prosperity, security, and the rule of law.

That is the president’s vision of American success and commitment to our friends in the Pacific.