Why the Indo-Pacific is the Pentagon’s ‘Priority Theater’ 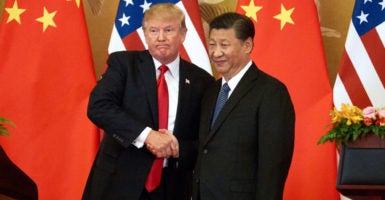 A new Defense Department report the report endorses the idea of engaging the Chinese military in the “pursuit of a constructive, results-oriented relationship,” one in which the U.S. can encourage responsible Chinese behavior. Pictured: President Donald Trump and China's President Xi Jinping shake hands at a press conference in Beijing in 2017. (Photo: Artyom Ivanov/TASS/Getty Images)

The Department of Defense’s Indo-Pacific Strategy Report, released June 1, is most remarkable for its clarity.

It underscores America’s enduring commitment to the region, which some of us have been trying to explain to our friends abroad since the presidential election in November 2016.

It’s also crystal clear on the China challenge in ways that will both rally support for American pushback and temper the extreme edges of the China-policy debate now raging in Washington.

As for the misses in the report, they are either mostly outside the Pentagon’s purview (trade and human rights) or minor.

The first sentence of the preface from acting Secretary of Defense Patrick Shanahan gets right to the point concerning the importance of the Indo-Pacific. He calls it his department’s “priority theater.”

Similarly, the first sentence of the report itself (“The Indo-Pacific is the single most consequential region for America’s future.”) could not be more explicit.

The document is mostly implicit about the broad support for the American commitment. The Trump administration may be providing more resources to the U.S. military, reshaping and enhancing deployments in the region, and improving readiness levels in ways that are absolutely necessary to provide long-term credibility.

It also recognizes congressional leadership, with reference to the Maritime Security Initiative, under which the U.S. provides strategically important militaries with capacity-building assistance, and the 2018 Asia Reassurance Initiative Act. In the same vein, it recognizes the obligations assumed by successive administrations under the 1979 Taiwan Relations Act.

The bottom line: Not only is the U.S. committed to the region for the long term, but this commitment is bipartisan and as much a matter of legislative branch conviction as executive initiative.

And what is the goal of this commitment? It is U.S. national interests, and as a means to an end, the “rules-based order,” which the report references repeatedly.

On China, the Indo-Pacific Strategy—like the Trump administration’s National Security Strategy and National Defense Strategy—puts China in an overwhelmingly competitive light. It quite directly states Beijing’s objective—“Indo-Pacific hegemony” —and America’s intention to resist its efforts “to reorder the region to its advantage.”

At the same time, however, the report endorses the idea of engaging the Chinese military in the “pursuit of a constructive, results-oriented relationship,” one in which the U.S. can encourage responsible Chinese behavior.

It is similarly careful in invoking a critical caveat about its concerns over Chinese foreign investment. “The U.S. does not oppose Chinese investment activities,” it says, “as long as they respect sovereignty and the rule of law, use responsible financing practices and operate in a transparent and economically sustainable manner.”

This is not the stuff of a 19th-century great-power showdown. It is about defending an order that benefits all states concerned.

At one point, the Indo-Pacific Strategy overstates China’s long-term ambitions as a quest for “global pre-eminence.” Elsewhere, it reveals internal administration contradictions between a reluctance to “impose our way of life on others” and necessary representations on human rights issues.

Even so, it should be noted that the region’s favorite beneficiary of geopolitical moral blindness, Burma, is not singled out for the valueless treatment one might expect from the Defense Department.

Many in Washington have suggested that Burma’s disappointing human rights record be ignored in order to better counter Chinese influence there, but not the authors of this report.

The report’s treatment of trade policy—thoroughly outside the Pentagon’s scope—is the big miss. Economic freedom, not a quest for “reciprocity,” ought to be the goal.

Trading relationships are very complex. Reciprocity in every instance in every sector is impossible to enforce. The benefits of comparative advantage being what they are, reciprocity is not even desirable.

What the U.S. ought to do is strive to release market forces, both abroad—in China, especially—and at home. That is what brings prosperity.

The contrary notion—that “economic security is national security”—has been cultivated by other recent administrations. It leads to unnecessary government encroachment on the liberty of Americans and hinders economic performance. With regard to American foreign policy, it also results in less American economic engagement, not more.

Although there are signs (many listed in the report, and others, such as military-readiness rates and procurement budgets) that the Trump administration is already implementing the strategy outlined in the report, we will be in the best position to judge its performance in retrospect.

In the meantime, the administration’s policies need an explanation. The Pentagon’s Indo-Pacific Strategy does a very reassuring job of that. That, in turn, will only further America’s objectives.

This article has been corrected to reflect that the report asserts the U.S. is resisting China’s efforts “to reorder the region to its advantage.”