To Counter China in the Pacific, America Reboots the ‘Island-Hopping’ Campaign of World War II 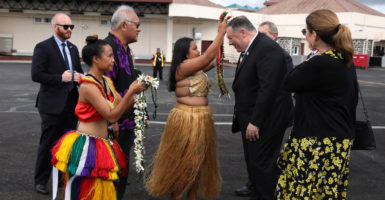 Onboard the jet during approach, the remote island’s aquamarine coastal waters and lush green tropical forests appeared as an inviting interruption to the vast, empty expanse of the Pacific Ocean.

So, to stop in time on the short runway, the Air Force pilots expertly and firmly sat the aircraft down, threw the engines into reverse, and applied the brakes.

With room to spare, the pilots completed the landing roll and taxied the jet to a full stop on the parking ramp. The engines silenced and ground crew personnel rolled up steps to the front and rear doors. A crowd gathered by the front stairway, waiting.

A few minutes later, Pompeo and his wife Susan descended to the tarmac where they were greeted by U.S. Ambassador Robert Riley and Micronesian Foreign Minister Lorrin Roberts. Two women in native dress presented floral mwar mwar necklaces to the secretary of state and his wife.

The first visit by a sitting U.S. secretary of state to the Federated States of Micronesia was officially underway. The historic event Aug. 5 underscored America’s more assertive presence in the Pacific Ocean—a region where China is seeking to extend its influence.

“Your small islands are big strongholds of freedom,” Pompeo said during a press conference a little while later. “And so today I am here to reaffirm the United States will help you protect your sovereignty, your security, and your right to live in freedom and peace. Just as we did during World War II, we will oppose any larger nation’s attempt to turn the Pacific islands into footholds for regional dominance.”

America’s promise of a democratic world order is now being defended on the very turf where it was originally won.

Imperial Japanese anti-aircraft batteries, trenches, and pillboxes remain on a jungle ridgeline 1.5 miles away from where Pompeo’s aircraft parked at Pohnpei International Airport.

Overgrown, weatherworn evidence of the “island-hopping” campaign of World War II, when U.S. forces leapfrogged across the Pacific, battling the Empire of Japan for strategic advantage on remote islands that few Americans had ever heard of before the war.

U.S. bombers dropped 118 tons of bombs and 6,000 incendiaries on Pohnpei during World War II, leveling the town of Kolonia. In the deep-water Truk Lagoon on the nearby island of Chuuk, U.S. forces dealt a devastating blow to the Japanese navy in one of the war’s key battles.

When looked at from the remove of history, the utility of those often-savage battles can be hard to fathom. After all, no one island was essential to winning the war. That’s clear.

Yet, in the end, the island-hopping campaign gave the U.S. an invaluable strategic advantage in defeating Imperial Japan. The Pacific islands, above all, provided airfields from which America’s land-based B-29 bombers could strike the Japanese homeland.

Today, the Pacific’s Freely Associated States—the Federated States of Micronesia, the Republic of the Marshall Islands, and the Republic of Palau—are, once again, on the fault line of clashing civilizations. The lesson from World War II remains clear: Strategic control of the Pacific Ocean hinges on who controls these islands.

According to a 2019 report by the Rand Corp., a nonprofit think tank with ties to the Department of Defense: “In short, the [Freely Associated States] are tantamount to a power-projection superhighway running through the heart of the North Pacific into Asia.”

According to the Defense Department’s 2019 Indo-Pacific Strategy Report, China “seeks Indo-Pacific regional hegemony in the near-term and, ultimately[,] global preeminence in the long-term.”

Thus, in the minds of America’s military leadership, a quiet battle in the larger contest between the U.S. and China for global dominance is currently underway in the Pacific islands.

Highlighting the region’s newfound importance to the U.S., the White House National Security Council recently created the new position of director for Oceania and Indo-Pacific Security.

Looking forward, the Pentagon is set to beef up the U.S. military’s presence in the Indo-Pacific, taking advantage of existing partnerships and developing new ones to pre-position U.S. forces and equipment.

From Pohnpei International Airport, Pompeo’s motorcade traveled to the town of Palikir, capital of the Federated States of Micronesia. Along the way, one caught snapshot images of idyllic, tropical inlets and the ocean beyond through intermittent breaks in the dense, misted, tropical foliage.

The rain showers were equally recurrent. The island is the third-rainiest place in the world, according to U.S. Embassy staff.

Curious observers lined the road. Some stood and waved. Others sat on the stoops of open doorways­­, their heads pivoting to meet the eyes of those inside each passing car.

A press conference followed the meetings.

“I am deeply honored to be the first secretary of state to ever visit your wonderful country,” Pompeo said. “There’s no clearer statement of America’s commitment to strong partnerships and alliances than showing up in person.”

In its simplicity and intimacy, the press conference in Palikir felt more like a city council meeting than one with the U.S. secretary of state. Pompeo wore a business suit; Panuelo and Oilouch wore short-sleeved button-downs and shell necklaces. Heine, for her part, wore a floral-print dress with a traditional headpiece.

Yet, despite the laid-back atmosphere, the significance of Pompeo’s visit was clear.

“It makes us feel very important when Secretary of State Pompeo travels all the way to the Pacific. … It also reinforces the fact that the [Freely Associated States] have a special relationship with the United States,” said Oilouch, the vice president of Palau. “We truly value and we believe in the United States’ mission and goal that this part of the world should be free and open to the world.”

“Together our three countries control a considerable part of the Pacific Ocean, including valuable shipping lanes,” said Heine, president of the Republic of the Marshall Islands. “If this area is not protected it becomes vulnerable and can become unstable. We cannot do it alone. We need to work together.”

As sovereign nations, the Freely Associated States maintain close ties with the U.S. through an agreement called the Compacts of Free Association, which has been in place since the early 1980s.

Under the agreement, the U.S. is responsible for the defense and security of all the countries. In return, the U.S. military retains exclusive access to their territorial waters and airspaces. That arrangement has given the U.S. an invaluable strategic edge in the Pacific Ocean since the end of World War II.

Rand Corp. writes: “The Compacts deny an enormous and strategically important section of the Western Pacific to potential U.S. adversaries, while enabling U.S. presence and power projection in the region.”

The Compacts are a profoundly good deal, too, for the Freely Associated States.

The island countries receive hundreds of millions of dollars in annual U.S. aid; they also enjoy the services of many U.S. government agencies, including the Federal Emergency Management System, the U.S. Postal Service, the Federal Aviation Administration, and the Department of Education. The countries’ citizens can live and work in the U.S. and are able to serve in the U.S. military.

The Compacts of Free Association were last renewed for another 20 years in 2003. Thus, with the compacts up for renegotiation in 2023, China will surely be looking to reduce U.S. influence, experts say, and possibly maneuver to gain rights to these islands’ territorial waters—a privilege enjoyed by America alone since World War II.

To that end, China’s economic influence on the Federated States of Micronesia is on the rise. The Chinese have already built community centers and gyms on the island of Pohnpei. China also awards business grants and bankrolls infrastructure projects across the islands.

“Our relationship with China is purely on economic and technical cooperation. I want to make that clear,” said Panuelo, the president of the Federated States of Micronesia, underscoring his country’s relationship with the U.S.

The U.S. is ramping up its presence, too—albeit modestly. A deployment of Navy Seabees is on Pohnpei, engaged in community improvement projects. And just four weeks prior to Pompeo’s visit, the U.S. Embassy in Pohnpei staffed a permanent public affairs post for the first time.

On its own, Pompeo’s Aug. 5 stopover was meant to send a strong message about U.S. resolve to maintain its sway over the Pacific Islands.

Pompeo used the historic occasion to confirm that the U.S. had begun the process to renew its Compacts with each of the three Freely Associated States. Delivering the news, Pompeo painted the move as a direct pushback against Beijing’s attempts to extend its influence in the region.

“These Compacts help sustain the important strategic partnerships that the Freely Associated States have had with the United States since World War II,” Pompeo said. “They sustain important economic assistance for the people of these countries, they sustain democracy and human rights in the face of Chinese attempts to redraw the Pacific in its authoritarian image.”

Pompeo’s last stop before departing Pohnpei was at a memorial to the 10 troops from the Federated States of Micronesia who died while serving in the U.S. armed forces in the post-2001 wars in Iraq and Afghanistan.

Inside the terminal at Pohnpei International Airport, Pompeo and Panuelo each laid a wreath of white gardenias beneath the photos of the fallen. Nearby, a small detachment of a few dozen U.S. military personnel stood in formation. Taps was played. Heads bowed for a moment of silence.

A solemn reminder that, in the end, there is no more unifying force between two nations than fighting for a common cause.

“We know China seeks to engage and to influence this region,” Pompeo said during the earlier press conference. “But I’m convinced that the people of the Marshall Islands, the people of Palau, the people [of the Federated States of Micronesia] understand that having partners that are democratic [creates] the best partnerships for the people, that will continue to make their lives better in the years and decades ahead.”