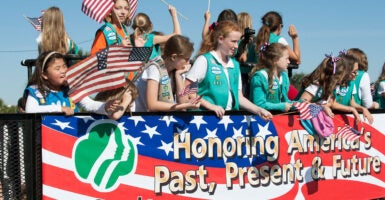 After posting a congratulatory message to Justice Amy Coney Barrett on Twitter, the Girl Scouts of America caved to political pressure and took the tweet down. (Photo: Education Images/Getty Images)

The Girl Scouts of America used its Twitter account this week to tweet out congratulations to Justice Amy Coney Barrett, the first woman with school-age children to be confirmed to the Supreme Court.

The Girl Scouts’ Twitter post read simply: “Congratulations Amy Coney Barrett on becoming the 5th woman appointed to the Supreme Court since its inception in 1789.”

The post seemed innocuous enough, and appropriate for an organization dedicated to the betterment of girls. Unfortunately, the tweet did not last even a day.

After receiving some predictable social media retaliation, the Girl Scouts deleted their tweet and posted not one but two groveling apologies masked as explanations.

Notice the second tweet, which declares that the Girl Scouts of America is  a “nonpolitical, nonpartisan organization” and “neither red nor blue.”

In posting and abruptly deleting the tweet, which also pictured the previous four female members of the high court, the Girl Scouts created an unusual predicament: The organization revealed its own partisan nature, as the projection at play here clearly suggests.

As most people know, the Girl Scouts of America is not just a brand that sells cookies. It’s an organization that purports to help girls thrive and develop leadership skills.

Research shows that girls learn best in an all-girl, girl-led, and girl-friendly environment. Girl Scouts is a place where she’ll practice different skills, explore her potential, take on leadership positions—and even feel allowed to fail, dust herself off, get up, and try again.

As good as that sounds, they’re certainly not living up to their own mission statement, or at least not on their Twitter account, which boasts nearly 100 million followers.  Again, the original post didn’t highlight only Barrett, but all of the four women previously seated on the Supreme Court. Since there’s only been five, each one is historic.

The Girl Scouts joined with gusto the swath of social media accounts that exude political and historical ignorance when the organization equated its own tepid celebration of these five women—who happen to include Barrett, a mother, a Catholic, an originalist, and a scholar in the mold of her mentor, the late Justice Antonin Scalia—with partisanship and criticism.

Surely Barrett would exemplify the adult version of the Girl Scouts’ mission statement: She is the mother of seven children—including two she and her husband adopted from Haiti—and a dedicated wife, law professor, federal judge, and now Supreme Court justice.

As far as politics goes, despite—or perhaps because of—her commitment to “originalism,” Barrett is far less partisan than progressives would paint her to be. Certainly less partisan than the leftist politicians who interrogated her proved themselves to be during her Senate confirmation hearing just a couple of weeks ago.

In fact, it was Barrett who made her own confirmation process far less political, tempering what had become a chaotic, highly partisan atmosphere brimming with accusations, conflict, and fear mongering. She exhibited a calm demeanor, a firm grasp on law, and strict boundaries wherein she adhered to the “Ginsburg Rule,” which prohibited her from indicating how she would rule on issues the Supreme Court likely might hear.

Given Barrett’s personal accomplishments, excellent jurisprudence, and unwavering commitment to professionalism under scrutiny, it’s hard to overestimate how significant of an achievement this is for her, for women, and for an entire generation of girls who may want to try to balance both a thriving career and happy family.

As the first woman on the court with school-age children, Amy Coney Barrett proves it can be done with help, patience, perseverance, and grit.

The Girl Scouts of America says it is committed to championing girls, yet as soon as it had the opportunity to applaud a woman who could be a role model to girls—and stand by the applause—the organization caved under pressure.

The Girl Scouts also lacked the chutzpah needed in this unfortunate, toxic environment to stand by the acknowledgement of four other inspirational women.

If the first rule of friendship is to stand by your girlfriend, even, and especially when, she’s criticized, then the Girl Scouts have failed.

For years, conservatives have been accused of igniting the culture wars, yet at every turn supposed cultural icons start new battles just fine on their own. Whether it’s “woke” branding, outright progressive indoctrination through commercials, or in this case, a slew of tweets gone wrong, the culture wars are getting stoked by the very people who claim to want unity.

If that’s what the Girl Scouts wanted, they not only failed to create that opportunity, but made it worse.