How Chile Handles This Contentious Moment Can Give America a Lesson 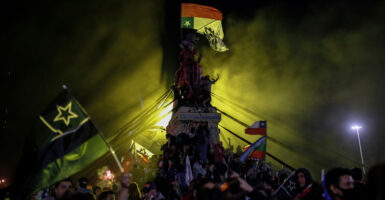 Political, economic, and social grievances came to a head in Chile, where an Oct. 25 referendum determined that the country will now draft a new constitution. Pictured: People gather in Santiago, Chile, on the day of the referendum. (Photo: Pablo Rojas Madariaga/NurPhoto/ Getty Images)

Chile, Latin America’s freest, richest, and most resilient economy, is going through a challenging period of political and economic turbulence.

The underlying culprit is not the coronavirus, but an unfortunate, ill-advised, populist enthusiasm for socialism that has been brewing in the country for a decade. Many Chileans seem to have forgotten what has made them successful.

Through a referendum on Oct. 25, the Chilean people launched the country on a two-year process to draft a new constitution. A difficult and contentious struggle is likely.

In a national address Sunday following the referendum, Chile’s president, Sebastian Pinera, said, “This plebiscite is not the end. It is the start of a road that we must travel together to agree on a new constitution for Chile.”

It is notable that the country’s current constitution already has been amended more than 50 times, with most of the anti-democratic measures from the Pinochet era taken out over the years.

To be sure, only time will tell what kind of new constitution will emerge in Chile over the next two years, but there is a real risk that the principles and policies that have underpinned Chile’s great economic success will be abandoned or undermined.

“Latin America’s fallen star” clearly has entered into a protracted period of elevated uncertainty. The writing of the new constitution coincides with Chile’s next presidential election scheduled for November 2021.

The political and economic turmoil erupted about a year ago, when demonstrations against a subway fare hike spiraled into intense and disorderly protests over a range of political, economic, and social grievances.

The small hike in the price of subway tickets was the immediate trigger, but the real economic discomfort has its roots in the deformation of free-market principles by Chile’s previous government under a socialist president from 2014 to 2018.

Consequently, during that period, Chile’s economy slowed to a growth rate of less than 2% on average, with investment declining and unemployment rising.

Yet, putting aside ill-guided economic policy choices that Chile’s socialist president made in the name of reforming the economy and making its society more equitable, one cannot help but wonder what else has happened to Chile, a nation where successful free-market economic transformation had been accompanied by a peaceful transition from dictatorship to democracy.

In his thought-provoking Wall Street Journal commentary earlier this year, Axel Kaiser, a Chilean scholar and lawyer, offered some critical clues for that question. He said:

The free market didn’t fail Chile, whatever its politicians might say, and the state doesn’t lack the means to restore the rule of law. The central problem is that a large proportion of the elites who run key institutions—especially the media, the National Congress, and the judiciary—no longer believe in the principles that made the country successful. The result is a full-blown economic and political crisis. Other nations should take note: This is what elite self-hatred can do for you.

That insight is a cautionary tale for America, which is also at a critical crossroads for its future. America’s freedom, opportunity, prosperity, and civil society indeed will be at grave risk, too, if the American people stop defending liberty and the rule of law.

Americans don’t often look to others for guidance, but it will be well worth keeping an eye on developments in Chile over the next two years, as an example of the perils that face a society not so different from ours that calls into question the long-established principles that have driven its economic and social success in the past.