The Results Are in: Reopening Fuels Record Economic Expansion 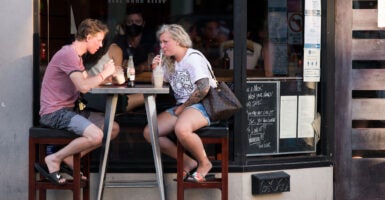 As the economic reopening continues in states and cities across the nation, economic growth last quarter smashed all prior records—growing by 7.4%, according to the U.S. Bureau of Economic Analysis.

If this blistering pace continued for an entire year, the economy would swell by 33.1%.

We still have a ways to go. More than 10 million fewer individuals are employed right now compared to the start of the year. Nevertheless, the progress is undeniable: More than 11 million jobs have returned since April.

By the middle of this year, the economy had contracted by 10.1%. The robust recovery of the third quarter closed two-thirds of the sharp economic contraction. Even after the unprecedented shutdowns, the economy is now only 3.5% smaller than the end of last year.

This definitely qualifies as “V-shaped” recovery. Despite the most severe economic turmoil due to the global pandemic, the economy is nearly 4% larger than at the close of 2016.

The pace of the recovery varies widely across the nation due to lockdown restrictions—ostensibly implemented to contain the spread of the virus. In El Centro, California—a state now imposing restrictions on family Thanksgiving dinners—more than 21% are unemployed. Los Angeles suffers from 13.6% unemployment.

Across New York City, draconian restrictions and an army of compliance officers continue to push tens of thousands of businesses out of business, resulting in 9.5% unemployment.

Meanwhile, unemployment in numerous communities in Missouri, Iowa, South Carolina, Wisconsin, Idaho, North Dakota, and Utah is at 4% or less. The unemployment rate of under 5% in Nebraska, South Dakota, Vermont, North Dakota, Iowa, and Missouri contrasts sharply with rates twice as high in New York, Illinois, California, Nevada, and Hawaii.

Although third-quarter information is not available for individual states, the Federal Reserve Bank of Philadelphia does provide a “state coincident index” to provide a glimpse at estimated overall economic activity.

The index reveals that from February to September, economic conditions in California are down 11.7%, are down 14.2% in New York, and are down 14.4% in Nevada.

Other states fared even worse. Hawaii—with some of the most draconian travel and quarantine restrictions in the country—plunged by nearly 33%.

Meanwhile, according to this index, four states that remained largely opened experienced economic declines of only 1% or less: Nebraska, Utah, Missouri, and Georgia.

These economic results showcase the power of allowing Americans to simply return to work, school, and society. Record growth occurred even as government transfer payments and Paycheck Protection Program expenditures dropped by 20% in the quarter.

This is not a typical economic recession. For the first time in our nation’s history, governments intentionally suppressed output and demand in an attempt to contain the virus. Our economy is improving and will likely improve even more when COVID-19 is fully contained. As such, we shouldn’t try to treat this recession with fiscal policy used to address a far different, “normal” type of recession.

Regardless, many in Congress continue to pursue trillions more in government borrowing and spending as the elixir for the lingering hangover caused by shutdowns. This will be a long-term drag on economic growth, and will ultimately saddle future generations with the bill.

Any additional federal relief measures should focus on providing legal protections for businesses to reopen and tailoring aid to meet the health crisis.

Full economic recovery does not stem from stimulus checks or bailouts from Washington. Rather, it’s largely a result of individuals and businesses safely and legally interacting with other. The historic economic rebound this summer proves that those properly informed of the actual risks of the virus and the appropriate mitigation measures are enthusiastically participating in this reopening.