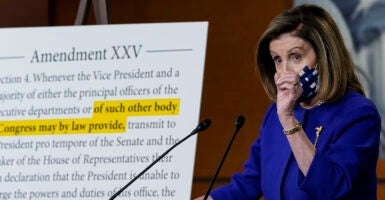 Speaker of the House Nancy Pelosi, D-Calif., speaks at a news conference at the Capitol on Oct. 9. Pelosi and House Democrats plan to introduce legislation based on the 25th Amendment that would create an Oversight Commission on Presidential Capacity, which would review a president's fitness for office. (Photo: Drew Angerer/Getty Images)

Congressional Democrats’ renewed embrace of the 25th Amendment is not aimed at removing President Donald Trump from office, at least not in the near-term, House Speaker Nancy Pelosi said Friday.

“This is not about President Trump. He will face the judgment of the voters,” Pelosi said. “But he shows the need for us to create a process for future presidents.”

The House’s top Democrat is backing a proposal to establish a government commission to evaluate the physical and mental fitness of the president for continuity of government at a time when Trump is still recovering from COVID-19 and has been on several medications for it.

“There are those, medical professionals who say that certain medications can impair judgment. I don’t know,” Pelosi told reporters. “This is really important. It’s not about any of us making a judgment about the president’s well-being. It’s about this respected, bipartisan—both aspects of it, the medical side of it and the dignitary, statesman side of it are selected by, equally by the speaker and the [Senate] leader … in a bipartisan way, and the vice president is crucial to that.”

Rep. Jamie Raskin, D-Md., initially proposed similar legislation to establish such a commission in 2017. The new bill has 38 Democratic co-sponsors, including the House Judiciary Committee chairman, Rep. Jerry Nadler, D-N.Y. Nadler’s panel likely would be the committee to consider the proposal.

The 25th Amendment allows for the vice president and a majority of Cabinet secretaries to determine whether a president is physically or mentally unfit to carry out the duties of the office. The vice president would become the acting president on a temporary basis. Congress could remove the president from office permanently with a two-thirds vote of both the House and Senate. That would be an even higher bar to reach than impeachment, because the latter requires only a simple majority in the House.

The 25th Amendment was adopted in 1967 after the assassination of President John F. Kennedy four years earlier. It was based on the concern about what to do while the president was still alive but experiencing a health crisis.

Raskin’s proposal points to Section 4 of the 25th Amendment, which empowers Congress to establish a permanent “body” with the concurrence of the vice president that can declare that the incumbent president is “unable to discharge the powers and duties of his office.”

“The 25th Amendment was adopted 50 years ago, but Congress has never set up the body it calls for to determine presidential fitness in the event of physical or psychological incapacity. Now is the time to do it,” Raskin said.

White House press secretary Kayleigh McEnany tweeted that Pelosi had seemed to be open to impeaching Trump again and then seemed to lose her train of thought in an interview.

“The only one who needs the 25th Amendment is Nancy Pelosi herself. ‘Good Morning, Sunday Morning,’ she bizarrely blurts out after suggesting impeaching President,” the press secretary said in the tweet.

Regardless of whether the proposal is about Trump now, Democrats and activists on the left have pushed the 25th Amendment as a means for removing Trump for years.

Months after Trump took office in January 2017, some on the left started the “Duty to Warn” movement that pushed for Trump’s ouster via the 25th Amendment, asserting his tweets and behavior indicated he was not mentally fit to be president.

Yale psychiatry professor Dr. Bandy X. Lee, who edited the book “The Dangerous Case of Donald Trump,” even gave a 2017 Capitol Hill briefing for members of Congress seeking to oust Trump with the 25th Amendment.

At Friday’s press conference, Pelosi was open to applying the 25th Amendment to Trump at a later time.

Rep. Jim Jordan, R-Ohio, the ranking member of the House Judiciary Committee, tweeted that the 25th Amendment talk is just another bizarre attempt by Democrats to oust Trump.

“First, Democrats tried the Russia hoax,” Jordan tweeted. “Then, they tried the fake #Impeachment. Now, they’re trying to use the 25th Amendment to remove the President from office. Like the President said, they’re coming after him because he’s fighting for us.”