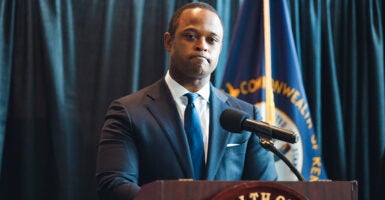 Contrary to the public assertion made by a Taylor family lawyer, Cameron, who is black, said the Louisville police did not go to the wrong address when executing a search warrant. Nor was Taylor shot and killed in her bed, as also publicly asserted by the family lawyer.

Ben Crump, a spokesman and defense attorney for the Taylor family, falsely claimed the police went to the wrong address. And in a statement full of inaccuracies, Crump, who negotiated a $12 million settlement with Louisville, said:

Taylor and her boyfriend were asleep in their apartment when Louisville Police burst into the home without warning using a battering ram, in search of a suspect who was already in their custody.

Cameron carefully, methodically, and with sensitivity to the Taylor family reviewed the evidence and explained why the law and facts did not warrant murder charges, however massive the intensity of the public’s passion for charges. Cameron said:

Evidence shows that officers both knocked and announced their presence at the apartment. The officers’ statements about their announcement are corroborated by an independent witness who was near, in a proximity to Apartment 4. … When officers were unable to get anyone to answer or open the door to Apartment 4, the decision was made to breach the door.

A man inside the apartment fired, striking an officer, and the officers returned fire, killing Taylor.

The anger over Cameron’s decision was fierce, ugly, and personal.

At a press conference arranged by the Taylor family attorney, Tamika Mallory, co-founder of the Women’s March, said:

I thought about the ships that went into Fort Monroe and Jamestown with our people on them over 400 years ago and how there were also black men on those ships that were responsible for bringing our people over here.

Daniel Cameron is no different than the sellout Negroes that sold our people into slavery and helped white men to capture our people, to abuse them, and to traffic them while our women were raped, while our men were raped by savages.

Sophia A. Nelson, who often appears as a pundit on CNN, tweeted: “Uncle Tom. Step & fetch Negro. The end.”

About the opposition to him because he is a black Republican, Cameron once tweeted:

Yesterday, a liberal attorney said I should stop eating ‘coon flakes’ in a Courier Journal interview. I am a proud lifelong Republican, part of a diverse KY GOP ticket, and yes I support Donald Trump. It’s time to stop telling black Americans what we’re allowed to believe.

Mallory, the Women’s March co-founder, and Dorsey are exactly why I produced the documentary “Uncle Tom,” which addresses the attacks against black conservatives for the crime of thinking differently. The film, now available on iTunes, Amazon Prime, and Roku, has received a 9.4 rating on IMDb and a 98% rating on Rotten Tomatoes.

“Uncle Tom” asks simple questions: Are blacks free to think for themselves? Black conservatives support low taxes, strong borders, choice in public schools. They want to reevaluate the welfare state on the grounds that it destabilizes the American family, no matter the race.

“Uncle Tom” does not tell viewers what to think. The film says blacks are free to think for themselves. We would be happy to provide copies of “Uncle Tom” for Mallory and Dorsey.