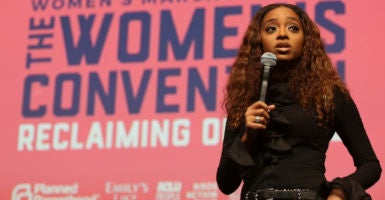 “My soul would not rest, standing by and doing nothing about it, to know that the U.S. government—my taxpayer’s money, $10 million a day—is going to a government, a military, that takes the lives of people who were there first,” says Tamika Mallory. (Photo: Chirag Wakaskar/Polaris/Newscom)

While speaking at an event hosted by the progressive Center for Constitutional Rights, Mallory claimed that Israel’s founding in 1948 amounted to a “human rights crime.”

“My soul would not rest, standing by and doing nothing about it, to know that the U.S. government – my taxpayer’s money, $10 million a day – is going to a government, a military, that takes the lives of people who were there first,” Mallory said at the event, where she appeared via video. Her comments were first reported by Jewish website Forward.

“There are a lot of people who will say, ‘Do you believe that Israel has the right to exist? I believe we all have a right to exist. I want to see all of us live in a free society where we are all able to raise our families and to be fruitful and have opportunities,” Mallory said. “This is not about stopping one side. This is about ensuring that the native people are able to enjoy the land. They shouldn’t ask anybody for their land. This is their land.”

“When you go to someone’s home and you need a place to stay, you ask, ‘Can I come into your home and can I stay here, and can we peacefully coexist?’ You don’t walk into someone else’s home, needing a place. It’s clear you needed a place to go—cool, we got that. I hear that,” she continued, referring to Israel’s founding in 1948.

“But you don’t show up to somebody’s home, needing a place to stay, and decide that you’re going to throw them out and hurt the people who are on that land. And to kill, steal, and do whatever it is you’re gonna do to take that land. That to me is unfair. It’s a human rights crime.”

Mallory previously sparked controversy by defending Nation of Islam leader Louis Farrakhan, a notorious racist and anti-Semite, after appearing at one of his speeches in February.

The Women’s March leader initially defended Farrakhan by implying that religious leaders are supposed to consider Jews their enemies. “If your leader does not have the same enemies as Jesus, they may not be THE leader!” she wrote in a March 1 Twitter post.