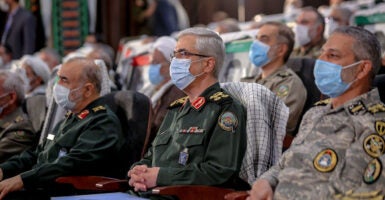 The Trump administration has enhanced NATO’s capabilities while pushing back against Russian aggression. It has introduced multiple rounds of sanctions on Russia, closed the Russian consulates in San Francisco and Seattle, and expelled 60 Russian diplomats and spies from U.S. soil. It has sold Javelin missiles and patrol boats to Ukraine and Javelin and Stinger missiles to Georgia to deter Russian aggression.

The administration has also pushed back against Nord Stream 2, a proposed natural gas pipeline directly connecting Russia to Germany that would undermine Europe’s energy security, and has increased U.S. exports of liquefied natural gas to Europe and championed energy alternatives like the Southern Gas Corridor to reduce Europe’s reliance on Russian gas.

The NATO alliance remains vital to deterring Russian aggression, but as a collective security alliance, it is only as strong as its individual member states, and only a handful of NATO members are living up to their spending commitments.

The current administration has correctly pressured NATO members to spend more, and an increasingly acute threat perception and the administration’s calls for higher defense spending in Europe have led to an additional $41 billion in defense investment from 2016 to 2018.

The administration has also doubled its spending on European defense compared with President Barack Obama’s final year in office.

Policy toward Iran has also been largely successful, with the current administration returning to the historical framework of U.S.-Iran policy that the Obama administration abandoned in its pursuit of a nuclear deal.

The Joint Comprehensive Plan of Action front-loaded sanctions relief for Iran and removed key restrictions on Iran’s uranium enrichment program after 10 to 15 years.

The Obama administration rewarded Iran for what could be temporary and easily reversible concessions and handed it a better deal on uranium enrichment than previous administrations gave to such U.S. allies as South Korea, Taiwan, and the United Arab Emirates.

After the U.S. withdrew from the Joint Comprehensive Plan of Action on May 8, 2018, the Trump administration launched a “maximum pressure” strategy to force Iran to return to the negotiating table and agree to a more restrictive deal.

On April 8, 2019, the Trump administration further tightened sanctions by designating Iran’s Islamic Revolutionary Guard Corps as a foreign terrorist organization. This gave the administration additional tools for applying sanctions against the Islamic Revolutionary Guard Corps and all foreign entities that do business with it, its subsidiaries, and its front companies.

The designation will allow U.S. sanctions to hit harder at strategic sectors of Iran’s economy because the Islamic Revolutionary Guard Corps is extensively involved in Iran’s oil, construction, and defense industries. The administration followed up a month later by adding sanctions against Iran’s iron, steel, aluminum, and copper industries.

Rather than focusing narrowly on the nuclear issue as the Obama administration did, the Trump administration has laid down markers on the entire range of Tehran’s malign activities.

The goal is to deter and penalize the regime’s aggressive regional interventions in Iraq, Syria, and Yemen, as well as to hold the regime accountable for its export of subversion and terrorism.

Regrettably, less progress has been made on North Korea. In dealing with Pyongyang, the Trump administration has repeated some of the failings of previous administrations while making new mistakes of its own.

Since assuming power in 2011, Kim Jong Un has exponentially increased testing of nuclear weapons and the missiles to deliver them against the U.S. and its allies. The international community has responded by imposing stronger measures on North Korea in response to its serial violations of United Nations resolutions and international law.

The U.N. Security Council toughened sanctions against Pyongyang’s nuclear and missile programs and for the first time constrained North Korea’s trade with other nations.

Unfortunately, weak international enforcement and the regime’s smuggling operations diluted the effectiveness of these sanctions. Furthermore, for years, successive U.S. administrations have pulled their punches on fully enforcing U.S. laws against North Korean, Chinese, and other violators.

However, the administration has not fully enforced U.S. laws, including those protecting the U.S. financial system. For all its tough talk, the Trump administration’s “maximum pressure” policy was never really maximum.

To date, President Donald Trump’s top-down approach of summit diplomacy has been no more effective than previous efforts to curtail Pyongyang’s nuclear ambitions.

On counterterrorism, the Trump administration’s policies have not marked a radical break from previous administrations. However, some of the changes that have been made are welcome course corrections.

The administration oversaw the destruction of the caliphate in Iraq and Syria, loosening Obama-era tactical restrictions imposed on the U.S. military in order to hasten the downfall of ISIS. This has caused both the flow of ISIS foreign fighters and the ability of ISIS to launch terrorist attacks around the world to be reduced.

Precipitous withdrawal of U.S. troops from Syria threatens long-term U.S. security interests in the region, which include not only the permanent defeat of ISIS, but ensuring the security of regional allies, minimizing Iranian influence, preventing a new wave of refugees, and creating positive conditions for the return of refugees who have already fled Syria.

In Afghanistan, the Taliban’s ongoing violence and unwillingness to forsake its alliance with al-Qaeda means that the prospects for peace remain dim. As with Syria, a hasty withdrawal of U.S. troops would remove American leverage and reduce prospects for success even further.

The administration has significantly stepped up its drone strikes against al-Shabaab, the al-Qaeda affiliate in Somalia, while also continuing to carry out targeted strikes in Yemen, where both al-Qaeda and ISIS are known to operate. These activities weaken the ability of terrorist groups to operate and complicate any plans they may have to attack the West.

Domestically, the administration has moved away from the Obama-era approach of funding local, community-led initiatives as part of its Countering Violent Extremism strategy.

Instead, the Department of Homeland Security has reallocated sections of this money toward law enforcement and has made welcome attempts to create greater accountability for how tax dollars intended to combat extremist ideologies are used.