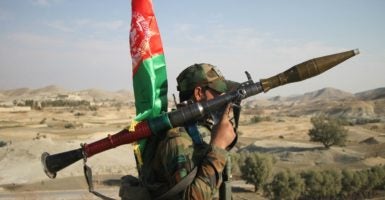 There have been recent media reports that up to 7,000 U.S. troops, roughly half of the number of troops there, will be removed from Afghanistan. There has been no official statement from the Trump administration confirming this and it is important to stress that senior officials are saying privately that no final decision has been taken.

After more than 17 years of a U.S. military presence in Afghanistan it is only natural to question the value of the mission. However, most of the criticism about the mission today comes from failing to see the mission for what it now is: a training, advising, and assisting mission for the Afghanistan National Defense and Security Forces (ANSDF).

Today, we are not dealing with the same situation in Afghanistan as in 2001 right after the U.S. invaded and ousted the Taliban. We are also not facing the same Afghanistan as in 2009 when President Barack Obama announced his surge policy and increased U.S. troops to its peak of 100,000 leading day-to-day combat operations.

Today there is a relatively small contingent of about 14,000 U.S. troops—the vast majority of which are training and mentoring the ANSDF. It is true that a small number of these troops are conducting high-end special operations missions to target senior Taliban leadership, remnants of al-Qaeda, and the nascent Islamic State of the Khorasan Province. But these missions are the exception rather than the rule.

A training mission coupled with a high-end special operations mission is something the U.S. does in countless countries around the world. It is through the lens of a training mission that we should see the U.S. presence in Afghanistan today, not as an extension of the war that has been raging since 2001.

In addition to misunderstanding what kind of mission the U.S. is performing in Afghanistan, there is an extreme pessimism regarding what has been accomplished in Afghanistan.

The New York Times recently reported that “the Taliban are stronger than ever.” This is pure sensationalism that is totally divorced from the reality. The Taliban today is nothing like the Taliban in 1996 when it rolled into Kandahar and Kabul and operated tanks and flew planes.

On Sept. 10, 2001, the Taliban controlled 90 percent of the entire country outside a small rump in northeastern Afghanistan controlled by the Northern Alliance. During this time all major road networks, all of the major population centers, and the capital city Kabul were under Taliban control.

The situation could not be more different today.

According to the most recent report from the special inspector general for Afghanistan reconstruction—hardly known for sugar coating the situation in Afghanistan—the Taliban “controls or influences” areas where only 10.5 percent of Afghanistan’s population live (a 1.5 percent decrease from the previous quarter’s report).

Conversely, the Afghan government “controls or influences” areas where 65 percent of the Afghanistan population resides. The Taliban has not come close to retaking Kabul. In fact, in recent years, the Taliban has only been able to hold parts of a district center on two occasions and only for a few days at a time before being expelled.

Yes, the Taliban might successfully raid an Afghan army base. It might successfully detonate a suicide bomber in Kabul, killing scores. On occasion it might hold parts of a district center for a few days. But we need to stop treating every tactical victory of the Taliban’s as America’s strategic defeat.

There is a huge space between victory and defeat and that is where the U.S. is today in Afghanistan and that is where the U.S. is likely to remain for the foreseeable future. Until there is a genuine peace settlement between all Afghans, and until Pakistan stops providing succor to the Taliban, we should accept that this is as good as it is going to get. This is not defeat. This is reality.

We should also stop using vague notions of nation building to judge our progress in Afghanistan. We are there to help create a stable enough Afghanistan so it can manage its own internal security without the presence of tens of thousands of foreign troops helping it. Nothing more. Nothing less. This way the Afghans can stop their country from becoming a hub for transnational terrorism like it was before 2001. This will also help bring stability to an increasingly important region of the world.

A crucial part of accomplishing this goal is the training mission. We saw what happened when Obama abruptly withdrew the U.S. training mission in Iraq in December 2011. Only two years later ISIS had taken Mosul and was knocking on the gates of Baghdad. For the sake of 14,000 trainers in Afghanistan, now is not the time to needlessly repeat the pricy mistakes of the past in Iraq.

This is why the news coming out of the latest rounds of talks in Abu Dhabi is welcome. Hopefully, representatives of the Taliban will soon meet with officials from the Afghan government to start meaningful talks about bringing peace to Afghanistan after decades of war. The U.S. should support this process along the way but remain skeptical of the Taliban’s motives.

The Taliban needs to prove that it is serious about talks because nothing in the past has shown it is a trustworthy actor. Withdrawing U.S. troops from Afghanistan—unless it was part of a broader confidence-building measure connected to the peace talks and coordinated with the Afghan government—could derail the talks before they get off to a meaningful start.

A capable ANDSF and a genuine political settlement led by the Afghans is the country’s best ticket to prosperity and America’s best hope for regional stability and security. This is why it is in America’s interest to continue with the training, advising in assisting mission in Afghanistan.

Now is not the time to abandon the Afghans and repeat the mistakes of Iraq.