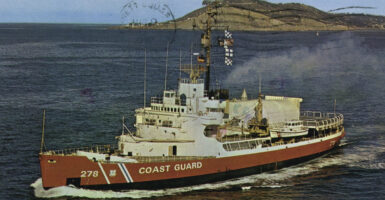 The U.S. Coast Guard's current, aging fleet of icebreakers is not up to the geopolitical challenges it faces in the Arctic region. Pictured: A postcard from the New York Public Library features a photograph of the U.S. Coast Guard cutter Staten Island, which served as an icebreaker until it was scrapped in 1974. (Photo: Smith Collection/ Gado/Getty Images)

A fire aboard the U.S. Coast Guard Cutter Healy on its way to a research mission in the Arctic late last month forced the Coast Guard to cancel all Arctic operations at a time when the United States can least afford it.

It pointed out again that the Coast Guard’s motto, Semper Paratus—“Always Ready”—is not being fulfilled in the region.

The Coast Guard has two operational polar icebreakers, and the Healy—its only medium icebreaker—is used for seasonal missions in the Arctic. Until it’s repaired, the U.S. will be on the sidelines while rival powers continue to pursue their activities in the area.

In the Arctic, presence equals power, and Russia is a dominant presence. A large area of Arctic territory lies within its borders, and the government is deeply invested there for both economic and military purposes.

Russia’s Arctic-based Northern Fleet makes up two-thirds of its entire navy, with 40 icebreakers already in service and three more currently in development.

Another rival of the United States, China, has declared itself to be a “near-Arctic state” and constructed two of its own icebreakers, with a third on the way.

New shipping routes and access to natural resources draw Beijing’s attention, even though the nation has no territorial claims there.

The exclusive economic zones of the U.S. in the Arctic and the Bering Sea extend 200 nautical miles from Alaska’s shoreline. The U.S. Coast Guard is responsible for patrolling this area to deter unlawful exploitation of U.S. resources.

Without the Healy, the Coast Guard will be unable to perform other essential functions, such as law enforcement operations, search-and-rescue missions, research, and defense activities.

What’s most frustrating is that the capability gap created by the Healy fire was completely avoidable. If the Coast Guard had been equipped to its own standard of three medium and three heavy icebreakers, it would have had the resources to compensate.

The U.S. Coast Guard needs a minimum of six icebreakers because of the maintenance cycles that these ships undergo. Three ships of each type allow for one to be in an extensive maintenance cycle, another in training, and a third on active assignment.

A fleet of fewer than three ships means risking the loss of a constant presence, or risking sending one icebreaker on a mission without the ability to rescue it. This scenario is likely to be the case if the one remaining icebreaker, the 44-year-old Polar Star, breaks down or gets stuck in the ice while on a mission.

As early as 2013, the U.S. Coast Guard had officially requested a new icebreaker fleet, called the Polar Security Fleet, including this six-ship minimum.

But it was not until 2019 that the Coast Guard awarded a contract for the design and construction of the first new heavy icebreaker, and it won’t be delivered until 2024, with two more coming in 2025 and 2027.

The future of the Arctic is developing rapidly, and if the U.S. wants to play a role in shaping that future, it needs to be there physically.

A constant Arctic presence takes years of planning and action to execute. Polar security has been recognized as a priority at least. But as the fallout from the fire aboard the Healy illustrates, we’re a long way from catching up.