Why US Needs to Break the Ice on Coast Guard Funding 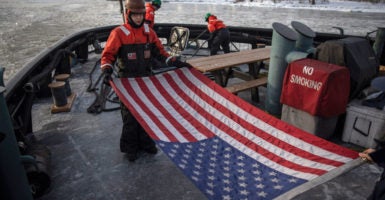 Members of the U.S. Coast Guard fold up a America flag aboard the USCGC Penobscot Bay, an icebreaking tugboat of the U.S. Coast Guard, as it cuts through ice and it makes its way north on the Hudson River between the cities of Kingston and Albany, on Feb. 1 in New York. During the winter months, the ship is responsible for providing search and rescue to the ice-covered areas throughout the Northeast and also works to clear shipping channels in the frozen Hudson River. (Photo: Drew Angerer/Getty Images)

Unlike the other branches of the military, the U.S. Coast Guard’s funding falls under the Department of Homeland Security, rather than the Defense Department.

As a consequence, the Coast Guard is the only military branch whose members didn’t get paid during the recently ended 35-day partial federal government shutdown.

In a recent Twitter video, Schultz said, “Ultimately, I find it unacceptable that Coast Guard men and women have to rely on food pantries and donations to get through day-to-day life as service members.”

While Coast Guardsmen are once again being paid, serious holes in the service branch’s budget remain. For many years, it has asked for increased funding to build new ships.

Regrettably, the Coast Guard’s requests for the minimum budget to strengthen the fleet has not been regularly and consistently met over the past decade.

It is in serious need of recapitalization. There are two primary components of the Coast Guard that require increased funds; namely, icebreakers and cutters.

The U.S. has strategic and economic interests in the Arctic region, which can only be accessed with icebreakers. Within the entire Arctic, it’s estimated that 13 percent of oil resources and 30 percent of gas resources remain undiscovered. Icebreakers can be used to find these in U.S.-claimed Arctic waters, north of Alaska.

Russia and China have increased their presence in their segments of the polar region. To protect U.S. sovereignty and economic interests, the U.S. likewise should increase its presence there.

The U.S. needs a fleet of six new polar-class icebreakers for year-round presence in the Arctic. A new icebreaker is due in 2023, but one new icebreaker won’t be sufficient for the Coast Guard to meet its needs in the polar region.

Congress should consider acquiring the icebreakers in a block buy to save upwards of $200 million, allowing it to be more efficient with its limited funding.

It protects ports and waterways and is deployed overseas to support other branches of the military. Due to insufficient funds, however, it isn’t able to protect all of these U.S. interests at sea.

The Coast Guard has created three new classes of cutter to modernize the fleet: the National Security Cutter, the Offshore Patrol Cutter, and the Fast-Response Cutter.

While the National Security Cutter is off to a very strong start with nine active ships, the other two cutter models require increased funding if the Coast Guard is to fulfill its missions.

While the Coast Guard has requested just the bare minimum program of record—the current plan for the Coast Guard fleet makeup—Congress should consistently meet the floor of $1.5 billion for procurement and acquisition of new vessels, though even more could be put to good use.

It’s in the best interest of the U.S. to provide the Coast Guard with at least the minimum budget it requires to efficiently protect our security interests at sea and resources in the polar region. We should invest now to strengthen our future security.