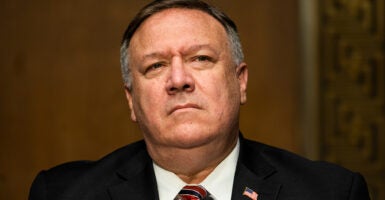 The Chinese Communist Party’s propaganda campaigns in the U.S. are “increasing in intensity,” Secretary of State Mike Pompeo warned in a speech to Wisconsin state lawmakers Wednesday.

Speaking at an event in Madison, Pompeo described the Chinese Communist Party’s multifaceted influence effort, in which operatives directly lobby public officials, to use front groups to spread messaging sympathetic to Beijing, collect intelligence on Chinese nationals living in the U.S., and push propaganda through state-controlled media outlets.

“We watch the CCP campaigns targeting state-level officials, local interests. We’ve seen them at PTA meetings. They have been in full swing for years, and they’re increasing in intensity,” Pompeo said.

He used the example of the Chinese Communist Party influence operation aimed at Roger Roth, the president of the Wisconsin State Senate. A Chinese Consulate official emailed Roth in February asking him to vote on a resolution praising the Chinese government over its handling of the coronavirus pandemic.

Roth shot down the request, writing “Nuts” to the diplomat.

Pompeo has been a leading force in the Trump administration’s response to China’s influence activities. He has spearheaded an initiative to force regime-controlled media outlets to register as foreign agents. He was involved in the decision to shut down the Chinese Consulate in Houston in July over “malign” intelligence activity.

In his 20-minute speech, Pompeo drew attention to espionage and influence activities occurring at the “municipal and city levels,” citing the arrest this week of a New York City Police Department officer accused of spying on Tibetan nationals on behalf of the Chinese Consulate in New York City.

Baimadajie Angwang, 33, is accused of collecting intelligence on the Tibetan community in Queens and providing the information to a diplomat in the consulate.

Angwang’s handler was allegedly affiliated with the China Association for Preservation and Development of Tibetan Culture, a front group controlled by the United Front Work Department, which Pompeo described as the Chinese Communist Party’s “official overseas propaganda tool.”

Pompeo highlighted the role that China’s consulates and embassy play in its propaganda and intelligence-gathering efforts on U.S. soil.

“It’s an uncomfortable set of questions when we think about what the Chinese Communist Party’s doing through their embassies in the United States,” he said.

Pompeo said the State Department is reviewing the activities of two organizations affiliated with the United Front Work Department, the U.S.-China Friendship Association, and the China Council for the Promotion of Peaceful Reunification.

“These organizations have apparently attempted to exert influence on groups all across the public sphere, including in our schools, in our business associations, impacting local politicians, media outlets, and Chinese groups here inside the United States,” he said.

Pompeo said the United Front Work Department also directs some sister city programs between China and the U.S. through the People’s Association of Friendship with Foreign Countries.

“It may have ‘friendly’ in its title,” Pompeo said of the front group, “but it is not so when it comes to American interests.”