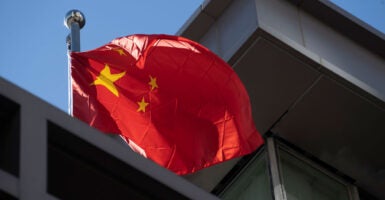 The U.S. State Department ordered the People’s Republic of China to close its consulate in Houston, reportedly in response to ongoing Chinese violations of intellectual property and intrusions into Americans' privacy. Pictured: A Chinese national flag waves at the consulate building after the United States ordered China to close its doors on July 22. (Photo: Go Nakamura/Getty Images)

This past week, the U.S. State Department ordered China to close its consulate in Houston, giving only several days’ notice.

The State Department reportedly made the move in response to ongoing Chinese theft of intellectual property and intrusions into Americans’ privacy.

Although many news reports have characterized this as extraordinary, it is worth noting that, in fact, the U.S. has closed other nations’ facilities for similar reasons. The Obama administration, for example, shut down Russian luxury retreats in Maryland and New York in response to Russian election meddling.

Part of the news coverage is rooted in reports that Chinese officials at the consulate in Houston were burning documents. This conjured up images of Japanese diplomats doing the same on the eve of Pearl Harbor.

That it could seem at least somewhat credible that China and the U.S. might be on the eve of war is an indication of just how badly U.S.-China relations have gotten.

In this regard, the real core of the issue is Chinese espionage. Broadly speaking, there is little question that this is going on. The Trump administration has provided ample evidence of the scale of Chinese espionage against the United States.

Whether it is American scholars working for China via the Thousand Talents program, or Chinese hackers infiltrating COVID-19 efforts, or Chinese state-run telecommunications firms redirecting chunks of the internet, there is an unprecedented, whole-of-society effort by China to ferret out economic, political, military, and personal information from Americans, and indeed the world.

This is part of a larger Chinese challenge to the overall rules-based system. China’s espionage efforts have encompassed the African Union, whose headquarters China built—conveniently incorporating instructions to download the building’s information to China at night.

China influenced the World Health Organization to ignore vital information on COVID-19 because that data came from Taiwan, and refused to cooperate in efforts to improve global responses to future pandemics.

Chinese efforts to remake the South China Sea into China’s southern sea, essentially assimilating international waters into Chinese national territory, recently have been called out by the State Department.

China’s scrapping of the “one country, two systems” approach to Hong Kong, codified in both international treaty and the Basic Law that is supposed to govern Hong Kong through 2047, has aroused global condemnation.

And much of America’s actions in the past several years have been aimed at countering these challenges. Indeed, the reasons for imposition of tariffs on China, as laid out by the U.S. Trade Representative’s Office, are not about the trade imbalance or Chinese currency manipulation, but Chinese efforts to pry intellectual property out of U.S. companies doing business in China.

Shutting down a diplomatic facility, unlike simply expelling diplomats as is typical in espionage cases, does signal a broader downgrading of relations. It is likely that Beijing will respond by shutting down one of the American consulates in China.

It is quite possible that the disruption associated with shutting down China’s consulate in Houston is nonetheless worth it. Insofar as any espionage activities are being run through the Houston consulate, the sudden closure is likely to disrupt those activities.

It would be helpful to the American public, however, and the broader global audience, if the Trump administration provided more detail about why it chose the Houston consulate. The various indictments issued by the Justice Department are a good example of how, by providing extensive information, China’s bad behavior is spotlighted for all to see.

By providing similar details on its reasoning here, the administration would reinforce the State Department’s message that Chinese bad behavior is what precipitated this action.