Why Interpol’s Chinese President Disappeared—and Why It Matters 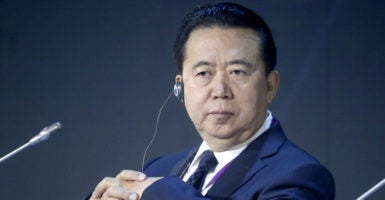 While Meng Hongwei didn't have extensive control over Interpol, his work for the Chinese government and his arrest illustrate that China continues to ignore the distinction between genuine criminals and political ones. (Photo: Metzel Mikhail/Zuma Press/Newscom)

Nearly a month ago, Meng Hongwei, the Chinese president of Interpol, disappeared during a visit home from France.

Meng – or someone acting for him — has since submitted his resignation to Interpol, and Beijing has announced that he’s under investigation for corruption.

His wife, who is still in France, now calls Chinese authorities “cruel” and says she’s not sure whether he’s still alive. He has not been seen or heard from since Sept. 25.

Meng wasn’t a diplomat. He was a vice minister in China’s Ministry of Internal Security. In other words, he was a high-ranking official in the Chinese Communist Party and a political policeman.

He almost certainly sent a lot of people to prison for their beliefs, and he evidently didn’t have any problems with the cruelty of the system he helped to run.

Perhaps he and his wife should have considered the possibility that the cruel communist system might devour him before he started working for it.

The president of Interpol doesn’t run its day-to-day operations, and Interpol—contrary to what you might have seen from Hollywood—doesn’t have any agents out there arresting people.

Interpol isn’t an international police agency. It’s more like a bulletin board where police agencies around the world post their “wanted” notices.

That still didn’t make having Meng at the top a good idea. Interpol’s constitution requires that it work only to track genuine criminals: it’s forbidden from getting involved in politics. But if Interpol is going to avoid politics, nations that use Interpol have to recognize that there’s a difference between real crime and political crimes.

Interpol has good rules, but it doesn’t make sure that nations live up to them. It relies on its members to do the right thing.

Some have speculated that Meng was forced to resign because China wasn’t happy with how he was doing his job. In other words, perhaps Meng wasn’t making it easy enough for China to use Interpol to pursue its enemies overseas.

It’s possible Beijing wasn’t happy, but China was using Interpol for political purposes before Meng took over, and it continues to do so. If Beijing thought Meng was a failure, its standards for success are frighteningly high.

It’s much more likely that Meng simply ran afoul of changing political winds in Beijing. Over the past several years, Chinese President Xi Jinping has purged the Communist Party’s security apparatus, filling it with his loyalists. Meng wasn’t a Xi protege, so—regardless of his job at Interpol—he had to go.

His disappearance says more about Xi’s demands for loyalty than it does about Interpol.

But Meng’s disappearance sums up the big problem with Interpol: Too many of the nations in it, including the People’s Republic of China, don’t recognize that there any difference between genuine crime and political offenses.

That has consequences for us.

Right now, across the United States, innocent people are being held in jail because Interpol gave credibility to a “wanted” notice from Russian President Vladimir Putin, or from the Nicolas Maduro dictatorship in Venezuela, or from any one of the other corrupt governments that use Interpol to harass their opponents.

These victims—like Alexey Kharis, whose business was confiscated by Putin and is now into his second year of detention in California—are suffering because of the abuses that Meng represented.

At Interpol, Meng has been replaced on an interim basis by Kim Jong Yang of South Korea.

That’s a huge improvement, but until the United States and other democracies take action to make sure that Interpol upholds its own rules, the abuses that China, Russia, and many other nations are perpetrating through it will continue.