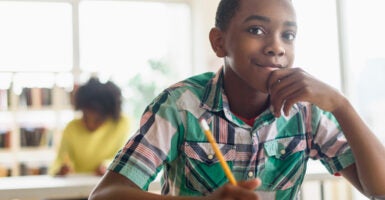 Over the past several years, systemic liberalism has metastasized throughout the public education system. The academic performance of U.S. students continues to decline. (Photo: JGI/Tom Grill/Getty Images) 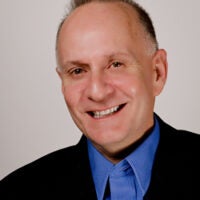 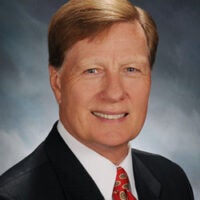 John Shoemaker, a former Army infantry officer and decorated combat veteran of the Vietnam War, spent 45 years in the high tech industry in executive marketing and sales positions. After retiring, he won election to the town council of Highland Beach, Florida.

Liberalism and its big government underpinnings have become systemic in American culture and institutions, with a profound impact on the nation.

In large part, an increasingly biased media, Hollywood, Big Tech, and academia have driven the left’s rise in prominence.

Freedom of thought, tolerance, and inclusion, once foundational principles of liberalism, have been replaced by social conditioning and disdain for, and suppression of, opposing views.

Public education is a prime example.

Similarly, the National Education Association was founded in 1857 as the National Teachers Association. Established primarily to protect teachers’ rights and ensure that members were treated fairly, it changed its name in 1870 after absorbing three smaller organizations.

The NEA also pushes to increase education funding and to discourage merit pay. From a legislative standpoint, the organization is active in reforming laws designed to limit the growth of charter schools and discourage school voucher programs.

The NEA’s stated mission is “to advocate for education professionals and to unite our members and the nation to fulfill the promise of public education to prepare every student to succeed in a diverse and interdependent world.” But critics fault the teachers union for putting the interests of teachers in front of the needs of the students they teach.

In recent years, the National Education Association came under criticism for what some perceive as protecting “bad” teachers and trying to change  public perception and beliefs about homosexuality and about “white privilege” and “white fragility” in our communities.

This can be illustrated best by the NEA’s recent support for both The New York Times Magazine’s version of history, called the 1619 Project, and for the Black Lives Matter movement.

Over the past several years, systemic liberalism has metastasized throughout the public education system.

By partnering with The New York Times and radical advocacy groups such as the Black Lives Matter Global Network Foundation, the NEA and its liberal positions are indoctrinating our youth.

NEA-endorsed curriculum developed to “inform” and to “challenge students to reframe U.S. history” will condition students to accept and normalize liberal social constructs such as white privilege and institutional racism, as well as slanted and distorted views of American history.

The NEA says it teamed with the Times to distribute copies of the 1619 Project to educators and activists around the country, saying it would “help give us a deeper understanding of ‘systemic racism’ and its impact.”

The 1619 Project—which contends that American history began with the introduction of slavery—was rolled out early this year in school districts in Chicago; Washington, D.C.; and Buffalo, New York.

Local school administrators decided to update K-12 history curricula to include the material, which argues, Reason reported, that “the institution of slavery was so embedded in America’s DNA that the country’s true founding could be said to have occurred in 1619, rather than in 1776.”

However, many historians and other critics question the 1619 Project’s accuracy and the closed process behind it. Others have taken issue with its ideological slant and argued that the content would be better suited for sociology classes than American history.

In recent days, following months of criticism, the Times has deleted some parts of the 1619 Project, including the statement that America’s “true founding” occurred in 1619.

In any case, reinterpreting history to fit a new political and social mantra is destructive to understanding the roots and progress of America, its successes and failures, and the reasoning during the respective time periods that led to specific actions and results.

Otherwise, as we all know, history has a way of repeating itself.

Further illustrating the influence of systemic liberalism in the classroom is integration of the “Black Lives Matter at School” curriculum, including the 1619 Project, into school districts across the United States.

Encouraging young minds to identify and condemn racism, social injustice, and oppression is a noble and righteous pursuit. However, that’s not what’s happening.

At least two of the three Black Lives Matter co-founders are self-proclaimed trained Marxists. Patrisse Cullors, arguably the most visible co-founder, is a vocal anti-Israel and LBGT activist.

Alicia Garza, another BLM co-founder, has praised convicted cop-killer and wanted domestic terrorist Joanne Chesimard, also known as Assata Shakur. Both Cullors and Garza have spoken unabashedly about how Shakur was a major inspiration for their work.

When one examines Black Lives Matter as an organization, one discovers that it advocates principles that go far beyond simply raising awareness of racism, social injustice, and oppression.

The BLM organization’s founding ideology and beliefs, particularly its position on disrupting the nuclear family, run contrary to traditional societal norms in America and represent a distorted and slanted view of what’s happening in our country.

By integrating Black Lives Matter’s lesson plans, educational resources, and political activism projects into their curricula, liberal educators lend credibility to one of the most radically divisive movements in our country’s history.

Worse, this approach convinces the easily influenced minds of our children that America is inherently “racist and evil,” with a sordid history of inhumanity. It inspires our youth to rebel against the very ideals that made America an exceptional republic and the most successful and compassionate country in the history of humanity.

Major financial supporters of black-led organizations, such as the Ford Foundation and George Soros’ Open Society Foundations, have invested hundreds of millions to influence public perception and policy related to social and racial inequality in America today and throughout our country’s history.

Through their participation in liberal, ideologically-based movements, teachers in some public school systems indoctrinate our children with Marxist beliefs and distorted views of American history and culture.

While liberal coalitions wage their indoctrination and social-conditioning campaigns on our children, the academic performance of U.S. students continues to decline.

For example, the global test results of the 2019 Program for International Student Assessment, or PISA—which evaluates 15-year-olds’ academic performance in reading, math, and science—showed American students lag behind their peers in Europe and East Asia.

The exam results, comparing 600,000 students across 79 countries, placed the U.S. about average in reading (eighth overall) and science (11th), but below average (30th) in math.

The nations that outperformed the United States included China, Singapore, Macao, Hong Kong, Estonia, Canada, Finland, and Ireland. The U.S. performed about the same as the U.K., Japan, and Australia.

It may be a stretch to say these results represent the culmination of over a half-century of systemic liberalism in our public education system. However, liberal indoctrination certainly isn’t helping to improve reading and math scores, and maybe schools should focus on the facts before trying to reframe history.

Although trillions of taxpayer dollars have been invested in improving the quality of K-12 education in America dating back to the early 1960s, it appears politics has trumped the academic needs of our children. Money is not the solution.

From teachers unions and school administrators to the liberal media, Big Tech, political advocacy groups, and the billionaires who support them, is it possible that indoctrination of our children with radical leftist views of racism in America has taken precedence over their academic needs?

U.S. educators would do better to provide our children with math, science, and reading skills necessary to compete in a global economy, and stick to the facts when it comes to teaching American history, civics, and culture.

Putting the academic needs of students ahead of the ideological and political interests of those we pay to teach them seems likely to reverse what has become a disturbing, destructive trend.