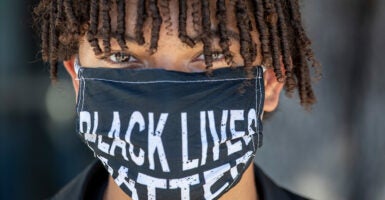 Public schools across the country have endorsed the Black Lives Matter movement and encouraged teachers, students, and parents to do the same, with some schools organizing their own BLM protests, a Daily Caller News Foundation review found.

The Black Lives Matter movement has been linked to 91% of riots across the United States between May 24 and Sept. 12, according to the US Crisis Monitor, a joint project of the Armed Conflict Location & Event Data Project and the Bridging Divides Initiative at Princeton University.

Despite the close links between the Black Lives Matter movement and riots across the country, public schools have been a consistent source of support for the movement.

Buffalo Public Schools integrated Black Lives Matter’s “guiding principles,” which include disrupting the nuclear family, into its curriculum for elementary school students, according to lesson plans obtained and published by Fox News on Friday.

One such principle included in the lesson, “Black Villages,” calls for “the disruption of Western nuclear family dynamics and a return to the ‘collective village’ that takes care of each other.”

“Please join Ms. Seidel and other Buckman families for a Kid’s March to show support for the memory of George Floyd and Black Lives Matter. Families are encouraged to make signs and meet in front of Buckman at 3pm on Sunday, June 7th,” the principal of Buckman Elementary, a Portland public school, told students in a newsletter.

Sabin Elementary School in Portland held a Black Lives Matter protest as well. A picture on the school’s website shows a crowd of more than 100 people, mostly children, standing with their fists in the air. The students and adults in the crowd, many of whom are holding Black Lives Matter signs, do not appear to be following social distancing guidelines in the photo.

The school’s principal also promoted a “week of action” organized by the Movement for Black Lives, a left-wing coalition that openly seeks to abolish police and prisons.

Teachers at Lincoln Park Elementary in Oregon also organized a Black Lives Matter protest that was promoted on the school’s website.

“The Black Lives Matter movement must include all of us as we support our Black and brown students, teachers, staff and families. It is not a Black problem, but a global problem,” Muncie Community Schools, an Indiana school district, states on its website.

The president of United Teachers Los Angeles, a union representing 30,000 teachers, announced in June that the union board had voted to support disbanding the Los Angeles School Police Department in solidarity with Black Lives Matter.

“We need to have a set of demands that dovetail with Black Lives Matter. We have to have massive political education,” Myart-Cruz said later in the interview when asked what her plans were for the union.

“People will say, ‘Not all police are bad,’ but we’re not talking about that,” she continued. “We’re talking about racism as a social construct, systemic and institutional racism, and wrapped on top is white supremacist culture, which is the dominant culture.”

Neither Myart-Cruz nor any of the schools or school districts mentioned in this story returned The Daily Caller News Foundation’s requests for comment.