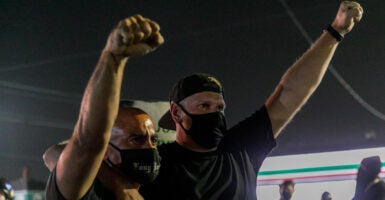 The riots of today are potentially more dangerous and divisive than the riots of the 1960s, said scholars during a Heritage Foundation forum Wednesday.

The riots are not yet at the “intensity and the breadth and the longevity” of the 1960s riots that began as peaceful protests and blossomed into acts of terror by the early 1970s, said Victor Davis Hanson, a senior fellow at the Hoover Institution.

“What makes it [current rioting] more dangerous, I think, is it has more cultural influence, big money, Wall Street, corporations, Silicon Valley, professional sports, the media, Hollywood, celebrities, foundations than anybody ever imagined in the 1960s,” Hanson said at the forum.

He added, “The people out on the streets are simply the military wing of a huge progressive, very affluent, and powerful progressive movement. We haven’t yet as conservatives and traditionalists discovered a way to counteract that.”

Another disconcerting point is that it took several years in the 1960s for violent organizations such as Students for a Democratic Society, Weather Underground, and the Black Panthers to hijack what had been peaceful demonstrations, Hanson said. Today, Antifa and individuals claiming loyalty to the Black Lives Matter movement have committed violence, looting, and arson.

“What we are seeing at the very beginning was sort of a late-stage 1960s and ’70s. Those protests went on for years with grassroots church involvement, social groups, peace groups, that were largely peaceful,” Hanson said, adding:

Then people like the SDS, the Weathermen, the Black Panthers began to hijack them and they began to go into bank robberies and attacks. I think in 1971, we had almost one terrorist incident every other day. But that was the late stage.

What’s unique about this phenomenon is that it was an early stage, from the beginning, BLM and Antifa were the organizers of it. Very quickly they hijacked it. There are not very many people who today in America say, ‘I want to protest the killing of George Floyd, I want to go out and peacefully protest,’ because they know what’s going to happen.

Hanson noted the theme several times that unlike in the 1960s, today the establishment supports demonstrators—with that support coming from corporations, professional sports, academia, and elected officials.

Even more unusual, he added, is the number of retired military brass openly critical of President Donald Trump’s push for law and order against demonstrators.

Hanson referenced the “war games” from the Transition Integrity Project, a group of politicians and scholars that floated military action to remove Trump from office.

“We heard about this war gaming recently that had a lot of Never Trumpers and liberals involved and actually imagining how you could remove a president from office through extra constitutional means. We saw nothing like that in the ’60s,” Hanson said.

Local officials should step up and be an ally of the federal government, said Mike Gonzalez, a senior fellow at The Heritage Foundation and author of “The Plot to Change America: How Identity Politics is Dividing the Land of the Free.”

“We are very leery of federalizing the National Guard. … What needs to happen is governors and mayors need to understand, people have a right to have safe lives,” he said.

“We have never seen governors and mayors and police stand by and allow the destruction that is taking place … This is on the mayors and the governors,” Gonzalez said. “They have to work with the federal government. They have a responsibility to protect the rights of people. They are abdicating that responsibility and it’s very worrisome.”

Gonzalez referenced three links from the 1960s to now.

“The first is that the riots frightened the establishment to agree to really bad policies that we have lived to regret, and I see the same thing happening today, potentially,” he said.

“The second is that the idealogues back then used violence that was taking place to sow the seeds of revolution and wanted to change America from within, and I believe that continues today,” he continued. “The third is the radicals that were there today are still around and are mentoring, funding, and training some of the key organizers of today at protests and riots.”

The radicalism of the 1960s prompted policymakers to promote racial preferences in university acceptance, government contracts, and other areas. This “formalized identity groups and provided incentives for people to adhere to these groups and nurtured the culture of victimhood that is so prevalent today,” Gonzalez said.

“The whole scheme betrayed the colorblind promise of the civil rights movement.” he said.

Gonzalez said it’s important to separate the sentiment of black lives matter, which should be universal, from the organization, Black Lives Matter Global Network Foundation, founded by Marxist idealogues.

“We all agree with the sentiment that black lives matter. But the organization is really, truly a Marxist outfit created by three women who are Marxists and they say they are,” he said.

Both Hanson and Gonzalez talked about the media’s role in propping up the radicals of today.

“In the past it was pretty much true that the three networks and The New York Times … and The Washington Post were pretty much left-wing, but there was an old generation of, I guess we would call them Cold War warriors that pretty much came down the side that America didn’t have to be perfect to be good, and the media itself … while left-leaning, wasn’t activist,” Hanson said. “There weren’t people, as [The New York Times’] Jim Rutenberg or [CNN’s] Christiane Amanpour, or [Univision’s] Jorge Ramos [who] have said: This is no time to be disinterested, you have to be partisan.”

Hanson added that big tech companies such as Google and Twitter have imposed an “asymmetrical censorship” that favors those who protest.

“I do believe that the internet has liberated us. I don’t want to go back to the era of [TV news anchors Walter] Cronkite and Harry Reasoner and John Chancellor actually being able to say, ‘And that’s the way it was, April 4, 1974,’” Gonzalez said.

“I think today we are much more liberated. I actually see that in how the left complains bitterly and wants Facebook to stamp down conservative information,” Gonzalez added. “So, we do have to jawbone Facebook and Twitter and make sure they stay fair. They are private companies. I grant them the right to do what they want. But we have to complain when they don’t play fairly. … MSNBC and Rachel Maddow is the price we have to pay for being liberated.”