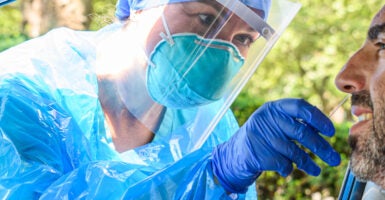 Brenda Fitzgerald, M.D., is a former commissioner of public health for the state of Georgia and a former director of the Centers for Disease Control and Prevention.

We’ve come a long way over the past eight months since the first recorded U.S. case of COVID-19 on Jan. 20.

We now have both the knowledge and the technology needed to move forward confidently. That path should be created immediately with a heightened focus on new, rapid testing.

We know we need a very targeted and tiered response because we have learned over time exactly who is most vulnerable. We now know that people over age 65 account for 80% of U.S. virus-related deaths. This older population remains the most vulnerable: 55% of deaths have occurred in nursing homes and long-term care facilities. People with comorbidities are especially at risk of dying. Children rarely have severe illness.

We also now know how person-to-person transmission takes place; namely, by droplets when an infected person coughs, sneezes, or talks. We also know that people who do not appear sick can still spread the virus.

All of these data points add up to significant information that clarifies best practices for public health. Additionally, what we do know helps us focus on what we still don’t know.

The big uncertainty now is: Who has the virus and who does not? That combination creates both risks and fear about how safe it is to interact with others the way we did pre-pandemic. That’s holding back many from resuming normal life.

The British are currently conducting a large study of 20,000 households where everyone over the age of 2 is tested once a week for COVID-19. The results from April to July revealed that only 1 in 4,000 was positive for COVID-19.

The vast majority (67%) of those testing positive did not know they had it and were unwitting vectors for their neighbors and community. The implication? For each person who has a serious medical problem, 3,999 people have an information problem.

This should bring clarity and focus to our path forward because we can solve that problem with widespread, rapid screening tests, which let you know in minutes if you’re negative or positive for the virus.

That’s a sharp improvement over some widely used tests, which can take days to return results.

There have been some vitally important developments recently, with potentially transformative possibilities.

For example, a new, rapid SalivaDirect test, developed by Yale and approved by the Food and Drug Administration, costs about $2 in supplies. Yale has made the technology publicly available to every lab.

It’s much easier to do these tests. They use a saliva sample, rather than a deep nasal swab. Initial reports suggest the results compare favorably in accuracy to the swab tests.

These rapid tests matter because they will allow low-risk people to have the confidence to resume their normal lives. They’re especially well-suited for people who want to go to crowded situations, such as theaters, schools, airplanes, or some workplaces.

If you knew everyone around you had screened negative, you could engage in activities with more assurance. Rapid tests will need to be used alongside other mitigation measures, especially for people who are at high risk, but their use is potentially transformative in how we’re approaching our response to the virus.

To make rapid COVID-19 screening work, President Donald Trump should direct his administration to embrace the new tests and move quickly. The FDA should quickly evaluate other new, rapid screening tests; ideally, ones that work like a home pregnancy test—done at home, with a result in hand immediately.

There are several such rapid tests available worldwide that are inexpensive to produce. The FDA should work to get good ones on the U.S. market as quickly as possible. The Department of Health and Human Services needs to explore redirecting funds already provided by Congress for testing toward these tests, so everyone who needs one can get one as often as needed.

Crucially, Americans need a consistent and clear message on how to protect themselves and others. Specifically, the Centers for Disease Control and Prevention needs to provide Americans with clear direction by outlining these guidelines.

Americans in long-term care or nursing homes must get regular, frequent testing.

Those in a high-risk health category (diabetics or over 65, for example) should take extra precautions even in low-contact situations; namely, wear a mask or face shield and carefully social distance.

For routine situations of possible contact (at grocery stores, for example), Americans don’t need a screening test if they feel well, but they should wear a mask or face covering, and wash hands or use hand sanitizer.

Before a high-contact situation (e.g., on an airplane or in a theater), Americans should get a rapid screening test first to increase safety and reduce fear.

Rapid screening is the missing piece in our response to date. Rapid knowledge of who is testing negative will keep us safe and allow us to fully resume our lives.

With this technology, we don’t have to wait, as some have suggested, until a vaccine is available for wide use. If we press ahead with emerging screening tests, we can conquer the paralyzing fears that are preventing Americans from returning to normal life.

In the early days of the pandemic response, the world was focused on the need for ventilators for treatment, so the engine of American ingenuity and production ramped up and met that demand.

Today, a redirected focus is clear: We need rapid tests for every American. It’s time for Trump to bring that focus.