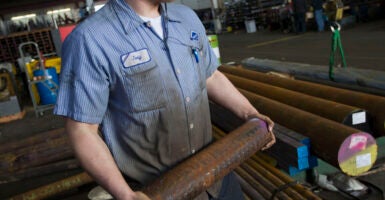 A sawyer carries a cut of machine grade steel to be shipped throughout the Pacific Northwest at the Pacific Machinery & Tool Steel Co. March 6, 2018, in Portland, Oregon. President Donald Trump announced he intends to impose tariffs on imported steel and aluminum. (Photo: Natalie Behring/Getty Images)

Looking Back on Trade

Since publication of the last Mandate on Leadership, the Trump administration’s trade policy has followed two very different tracks. Some positive steps have been taken to affect temporary reductions in tariffs on imports, but most trade activity has involved restricting the freedom to trade in America.

Since 2017, legislation has been approved to continue the Generalized System of Preferences and Miscellaneous Tariff Bill tariff elimination programs. The Trump administration also began to advance the United States-Mexico-Canada Agreement through Congress in 2019, an agreement to replace the North American Free Trade Agreement.

The Generalized System of Preferences and Miscellaneous Tariff Bill, signed by President Donald Trump in 2018, are trade programs implemented by Congress that temporarily eliminate tariffs on thousands of products from around the world.

The Generalized System of Preferences program primarily targets imports of intermediate goods from developing countries in order to promote economic growth and economic freedom in the beneficiary countries.

The Miscellaneous Tariff Bill program also eliminates import tariffs temporarily, but it addresses imports of intermediate goods that are “noncontroversial” because they are not produced in the United States. These programs are commonsense ways to eliminate tariffs on products that are used to increase the efficiency and competitiveness of U.S. manufacturing.

President Donald Trump signed Generalized System of Preferences and Miscellaneous Tariff Bill legislation in 2018, but both programs will need to be reauthorized in late 2020.

USMCA makes important changes to ensure that North America is equipped to trade freely as the world economy continues to evolve and advance. Specifically, the chapters on digital trade, intellectual property rights, and customs administration and trade facilitation prioritize the integration and protection of information technology.

USMCA also maintains much of the original framework of NAFTA, including the tariff-free treatment of scores of products and services.

Unfortunately, USMCA contains some shortcomings, such as expansive labor and environmental chapters, divisive provisions on sexual orientation and gender identity, and more restrictive rules of origin for the automotive industry. These components of USMCA will likely have a negative economic impact.

The Trump administration also made a deal with House Democrats in late 2019 that further expanded the scope of the labor and environment chapters, as well as the mechanisms to enforce them.

In 2018, Trump imposed tariffs of 25% on steel imports and 10% on aluminum imports. The tariffs were imposed following arguments that imports of the products were a threat to U.S. national security, as permitted under Section 232 of the Trade Expansion Act of 1962.

The result has been a multi-front trade dispute in which American consumers and businesses are the primary casualties.

Addressing concerns regarding trade with China has been a focus of the president’s trade policies. While the administration has rightly identified concerns with respect to investment restrictions, intellectual property theft, and subsidies within China, imposing tariffs has been the primary strategy to address these concerns.

The president has levied tariffs of 25% on more than $250 billion worth of imports from China, as permitted under Section 301 of the Trade Act of 1974.

Again, American families and businesses are the primary casualties.

Looking Back on Taxes

In the fall of 2017, the president explained that “our tax code is a giant, self-inflicted economic wound.” American businesses and the people they employed faced the highest corporate tax rate in the developed world. U.S. corporations were leaving, moving their headquarters and factories to more competitive nations around the world. New business investment’s contribution to gross domestic product growth turned negative in 2016.

Following the collapse of health care reform in the Senate, tax reform took center stage. A short five months later, the president signed into law the most sweeping update to the U.S. tax code in more than 30 years.

Now known as the Tax Cuts and Jobs Act, the law simplified taxpaying for many Americans, lowered taxes on individuals and businesses, and updated the business tax code so that American corporations could again be globally competitive.

The Tax Cuts and Jobs Act permanently lowered the federal corporate tax rate to 21%, down from 35%. After accounting for average state corporate tax rates, U.S. businesses now pay rates similar to those paid by their competitors in other countries.

The law also moved away from taxing the worldwide profits of U.S. businesses so that our businesses can better compete with foreign-headquartered businesses.

Just as significantly, the law removed an impediment to U.S. investment by allowing businesses to fully write off many of their new investments. Under previous law, the cost of a new piece of industrial machinery, for example, had to be deducted against taxable income spread out over many years.

First-year expensing allows that full write-off in the same year as the purchase, lowering the tax cost of new investments. The expensing provisions begin to phase out after 2022, leaving an opening for further expansion of the provision by Congress.

Taken together, the business tax reforms and other pro-growth policies contributed to increased investment, an uptick in weekly earnings, and more new businesses prior to the 2020 crisis.

Nine out of 10 Americans received a tax cut because of lower tax rates, an expanded standard deduction, and a doubled child tax credit. On average, taxpayers in every congressional district received a tax cut in 2018. Households saved an average of $1,400, and married couples with two children saved $2,900 in taxes in one year.

Among many other reforms on the individual side of the tax code, the law capped the previously unlimited deduction for state and local taxes. The unlimited deduction benefited only a minority of taxpayers and provided a federal subsidy for high taxes and the expansion of government at the state level. In the 2018 legislative session, 14 states cut taxes in response to the federal tax cuts.