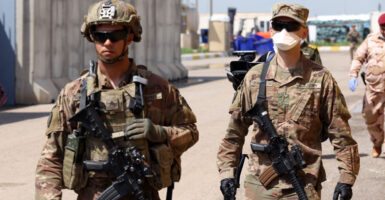 The announcement Wednesday of U.S. troop withdrawals from Iraq and Afghanistan marks another step forward by President Donald Trump to give the two nations greater responsibility to provide for their own security with continuing American support.

“The United States has decided to reduce our troop presence in Iraq from about 5,200 to 3,000 troops during the month of September,” Marine Gen. Frank McKenzie, the top U.S. commander in the Middle East, announced in Baghdad.

McKenzie later told a handful of reporters that the U.S. is planning to reduce its troops in Afghanistan from the current 8,600 to about 4,500 by early November.

“At 4,500, we’re still going to be able to accomplish the core task that we want to accomplish, and we’ve shown more than ample goodwill in our willingness to demonstrate that we don’t want to be an occupying force in this country, but we do have strategic interests, vital interests, that compel us to be certain that these entities such as al-Qaeda and ISIS can’t be guests there to attack the United States,” McKenzie said.

Did Trump make the right call in approving the troop withdrawals from Iraq and Afghanistan? There is no pat answer to that question—at least not yet. Leaders have to make prudent decisions based on the reality on the ground. Sometimes the smart answer is more troops, not less. In the end, the right number is the right number.

When the Defense Department redeploys forces, it should have nothing to do with politics. The important questions to ask are: Do the moves serve our national interest? Do they help keep America free, safe, and prosperous?

Those are the questions that should drive our military posture around the world. And it looks like those questions were foremost in the president’s mind.

The U.S. has a stake in a stable Middle East and a steadying South Asia. Both contribute to taming transnational terrorism and help push back on China’s destabilizing activities, Russia’s meddling, and an expansionist Iran. And despite ups and downs, U.S. military operations in Iraq and its environs as well as in Afghanistan have advanced all those goals.

We have never made more progress in the Middle East and South Asia than over the last four years. The ISIS caliphate was crushed. Iraq is more stable than it has been in a long time. The Afghans have fought the Taliban to a stand-off.

U.S. influence in both regions is on the upswing. In the Middle East, the Trump administration recently sealed a major agreement normalizing relations between Israel and the United Arab Emirates. In South Asia, the partnership between the U.S. and India has grown by leaps and grounds.

All these advances would not have been made without American troops on the ground. But U.S. forces have not shouldered the burden alone. Rather, they have shared the burden of advancing common interests against common adversaries.

That said, the right question, now as always, is: What’s next?

As the need for U.S. forces in Iraq and Afghanistan declines, they should be redeployed for other missions. Because America is a global power with global interests and responsibilities, there is plenty of other work on the to-do list. Moreover, the military has to train and prepare for future missions.

What is key is that the withdrawal of U.S. forces has to be based on real-world conditions, not managed by the calendar. The Trump administration has taken that approach. In both Iraq and Afghanistan, the United States has consulted with the host nations, which have agreed that the troop drawdowns make sense.

In neither case is the U.S. abandoning our friends or responsibilities. This is important in Afghanistan, where the U.S. has made clear to the Taliban that the future of American troop levels will be determined by progress in the talks between the Taliban and the Afghan government. The Taliban are dead wrong if they think the U.S. will simply forget the Afghan people and walk away.

Likewise, the U.S. has no interest in ceding ground in the Middle East to Iran. The U.S. will continue to partner with the Iraqi people to continue strengthening both their security and economy.

Indeed, the next steps for really advancing U.S. interests and regional peace in the Middle East and South Asia will not be focused on the size of U.S. forces in the regions.

In the Middle East, the U.S. needs to continue to emphasize regional cooperation and partnership. Trump’s vision of achieving a collective security and economic partnership with like-minded nations in the Middle East is inching closer to reality. His administration needs to double down on that effort.

In South Asia, the U.S. has achieved tremendous momentum. A stable Afghanistan and a growing partnership with India present extraordinary opportunities—a once-in-a-generation chance to make South Asia the cornerstone of the free and open Indo-Pacific strategy. That is an opportunity the U.S. cannot let pass.

Trump has promised to end America’s “endless wars.” He is fulfilling that promise by withdrawing troops from Iraq and Afghanistan responsibly and continuing our partnership with those nations to preserve their stability and security.