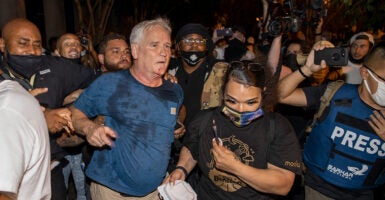 A crowd swarmed and shouted at Sen. Rand Paul and his wife as they left the White House after President Donald Trump closed out the RNC. A police officer escorting the Kentucky Republican appeared to get shoved into Paul.

Rand Paul just got chased by a crowd back to his hotel, after leaving the White House from Trump’s Republican Party Nomination #DC #DCProtests pic.twitter.com/h1kPcZG1jh

Fights are breaking out between officers and the crowd pic.twitter.com/CU2iM4JKgz

Protesters asked Rep. Brian Mast, R-Fla., “What do you think about police killing black people in this country?” while he was leaving the White House, video shows.

Mast replied: “Anybody murdered is wrong … nobody should be killed,” video shows.

Mast, a double-amputee, then tried to walk away from the crowd, though protesters followed him chanting “black lives matter,” video shows.

Protesters harass congressman @BrianMastFL. He repeatedly says that it is wrong for anyone to be murdered, but the crowd seems to want him to address black people being murdered pic.twitter.com/12YLL4aVbS

Outside another gate, protesters confronted a man attempting to leave the White House, video shows.

“Go hide, ya f—— p—-” a protester yelled at the gate before the crowd began chanting “George Floyd” and “Breonna Taylor,” video shows.

Earlier in the night, an elderly man was harassed and knocked to the ground as he tried to walk through the protests.

an elderly man was just assaulted. he was punched in the head and fell on the pavement pic.twitter.com/PkJsdddQGa

The protests outside the White House came as the RNC wrapped up its final night with Trump accepting the Republican presidential nomination.