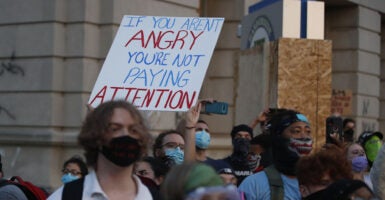 Videos posted by RawsMedia Monday and Tuesday portray two separate incidents in which protesters surround people eating at restaurants and yell into their faces. Pictured: People hold signs as they march outside the County Courthouse during demonstrations against the shooting of Jacob Blake in Kenosha, Wisconsin, Aug. 25, 2020. (Photo: Kamil Krzaczynski/AFP/Getty Images)

Two videos appear to show protesters in Washington, D.C., harassing people eating at outdoor restaurants who are not raising their fists.

Videos posted by RawsMedia Monday and Tuesday portray two separate incidents in which protesters surround people eating at restaurants and yell into their faces.

A video posted Monday shows a woman seated at a table wearing a mask surrounded by protesters who chant “white silence is violence” while they hold their fists high in the air. The woman remains seated and appears to say something to a man standing next to her, the video shows.

The man, who has his back to the camera, leans down toward the woman’s face as the crowd continues to chant “white silence is violence” and “no justice, no peace.”

Metropolitan Police Department spokeswoman Alaina Gertz told The Daily Caller News Foundation she could not provide information on the incidents.

“If any individual feels threatened or in a dangerous situation in the District of Columbia, they should immediately call 911 so an officer can respond to the incident,” Gertz told The Daily Caller News Foundation.

Washington Post reporter Fredrick Kunkle identified the woman in the video as urban planner Lauren B. Victor, saying that Victor said: “I felt I was under attack.” Kunkle also said the incident took place in Adams Morgan.

“In the moment, it didn’t feel right,” Victor said, according to Kunkle, though she added that she understood the protesters’ anger. “I wasn’t actually frightened. I didn’t think they’d do anything to me. I’m very much with them. I’ve been marching with them for weeks and weeks and weeks.”

Victor did not immediately return The Daily Caller News Foundation’s request for comment.

A separate video shows a couple, a man and a woman, seated at a table outside Mezcalero Cocina Mexicano on 14th Street as a woman repeatedly yells at them. The young man puts on his mask as the protester continues to yell at him in the video.

People inside the restaurant can be seen staring out the windows at the spectacle, and the video pans over to show a man seated next to the couple who is raising his fist high in the air and looking at the table.

“Protesters says people who don’t raise there fist is a white [supremacist],” RawsMedia captioned the video.

“They shot him in front of his children!”#DCProtests stop by restaurants in white spaces to read facts on Jacob Blake #JusticeForJacobBlake pic.twitter.com/crPM1yESa0

Another video posted early Tuesday morning shows protesters marching down the streets of D.C. outside restaurants chanting “no justice, no peace.” The protesters thank bystanders who raise their fists in the video.

“That’s what the f— we’re out here for!” someone shouts.

The footage shows a masked woman and a masked little boy raising their fists high in the air. “Thank you, little man,” one of the protesters said in the video. “Good job, little man, good job.”

Restaurant goers raise their fist in solidarity with DC Protesters after reading of facts on Jacob Blake. #DCProtests #JusticeForJacobBlake pic.twitter.com/kqqT1chl86