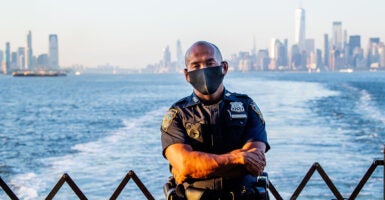 Emily Mooney is a resident policy fellow and manager for the R Street Institute’s Criminal Justice and Civil Liberties team.

The ongoing COVID-19 pandemic and racial justice protests have come together to produce one of the strangest ironies of 2020: Many of the same people who publicly support defunding the police and curtailing the reach of the criminal justice system are calling for law enforcement to police minor behaviors.

New York City Mayor Bill de Blasio, for example, applauded the city’s decision to cut $1 billion from the police department budget while deploying thousands of officers to aggressively enforce the state’s social distancing rules with fines and arrests. At this point, police have made scores of arrests and issued hundreds of citations.

The irony is on full display in Seattle, too, where the City Council recently approved a plan to begin defunding the police while maintaining what The Washington Post calls “an aggressive campaign” to enforce social distancing rules.

Under Seattle’s social distancing rules, not only can individuals be jailed for noncompliance, business owners can be jailed if they fail to enforce the rules in their establishments.

Numerous other states, counties, and towns have deployed law enforcement to enforce social distancing orders, and they aren’t just for show.

Washington, D.C., Mayor Muriel Bowser has instructed police to find and punish mask violators with $1,000 fines. Among those charged or jailed for social distancing violations are pastors in Florida and Louisiana, wedding hosts in New Jersey, a solitary paddleboarder off Malibu, and even a homeless man who violated curfew in Orlando by—irony of ironies—not being at home.

It’s hard to imagine how these actions could possibly coincide with the calls of racial justice advocates.

Some have argued that the true aim of the “defund the police” movement is not to do away with the police (although some, more radical people may seek that objective), but rather to scale back the role of law enforcement with respect to minor crimes and crises in favor of more measured responses led by community and social service providers.

All they seek, in this telling, is for policymakers to reconsider: (1) what behaviors truly necessitate a criminal justice response and (2) whether or not the current-day response actually brings about the intended outcomes—namely, increased public safety and community health.

It’s clear that criminalizing and deploying law enforcement to enforce public health restrictions accentuates the policing of minor behaviors, something neither law enforcement nor the public wants at this point.

After all, expanding reasons for police-civilian interactions will only increase opportunities for arrests and police use of force. During one notable social distancing arrest in New York City, an officer repeatedly punched a man and then knelt on his neck to handcuff him—the same tactic used on George Floyd.

Not to mention, any fiscal or jail penalties are bound to have a greater impact on those of lesser means. Poverty rates among blacks, Hispanics, and Native Americans are double that of white Americans. And black Americans, in particular, have been disproportionately impacted economically during COVID-19.

Even if there were equal enforcement of social distancing and public health restrictions (and that’s a big if), fines or jail time will hit those struggling financially harder than those who are not.

Making matters worse, in at least some cases—like the Malibu paddleboarder and others—enforcement has targeted people who pose no clear public health threat.

Moreover, rather than prevent infection, mask and distancing arrests will increase exposure risks among law enforcement, those in jail, and the communities to which jailed individuals return. We know that the tight quarters and the constant population turnover of jails make them perfect vectors for community spread.

Indeed, researchers studying the relationship between jail-community cycling and COVID-19 cases in Chicago found suggestive evidence that the cycling of people in and out of the Cook County Jail explained more than half of the variance in case rates among different Chicago ZIP codes.

For these reasons and more, policymakers should rethink their move to criminalize and police coronavirus restrictions. To begin this shift, local and state officials should at least clarify that criminal enforcement should be a last-resort action, preceded by efforts to educate individuals on the restrictions and their importance.

Using criminal sanctions to enforce COVID-19 restrictions is counterproductive to the aims of racial justice advocates. And it risks more unnecessary confrontations between civilians and law enforcement with little gain to public health.