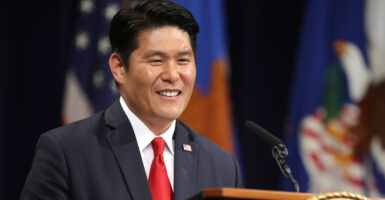 Attorney General Merrick Garland appointed a veteran federal prosecutor to investigate whether any laws were broken when President Joe Biden held on to classified documents from his eight years as vice president.

“I will conduct the assigned investigation with fair, impartial, and dispassionate judgment ,” Hur said in a public statement. “I intend to follow the facts swiftly and thoroughly, without fear or favor, and will honor the trust placed in me to perform this service.”

Hur is likely to have a higher profile in the coming weeks and months. Here are five things to know about him.

Hur began his legal career as a Supreme Court clerk for Chief Justice William H. Rehnquist, who first was appointed to the high court by President Richard Nixon and named chief justice by President Ronald Reagan. Both presidents were Republicans.

Hur is a graduate of Stanford Law School, where he was executive editor of the Stanford Law Review. Hur also received an undergraduate degree from Harvard in English and American literature.

On Nov. 2, 2017, President Donald Trump nominated Hur to be U.S. attorney for the District of Maryland.

Interestingly, Trump named Hur to replace U.S. Attorney for Maryland Rod Rosenstein, whom the president had appointed as deputy attorney general. It was Rosenstein who later appointed Mueller as special counsel to investigate Trump over allegations of “collusion” with the Russian government.

The Senate unanimously confirmed Hur to the U.S. attorney post in March 2018 after Maryland’s two Democrat senators endorsed his nomination by Trump.

“Marylanders have been anxiously awaiting confirmation of our next U.S. attorney for the District of Maryland. I am pleased that the Senate has unanimously confirmed Robert Hur for this lynchpin law enforcement position, as we need our U.S. attorney on the job now, working as a strong partner with state and local officials to keep our communities safe and secure,” said Sen. Ben Cardin, Maryland’s senior U.S. senator. “I look forward to working with Mr. Hur and am confident that he will focus on protecting Marylanders across our state by reducing violent crime, breaking up gangs, fighting the drug epidemic, enforcing civil rights, and rooting out corruption.”

“Robert Hur’s confirmation is critical to our state and I thank my colleagues for unanimously approving his nomination to be Maryland’s next U.S. attorney,” Van Hollen said. “Working together with local, state, and federal partners, I’m confident we can move forward on the pressing issues facing our state—from improving public safety, to fighting the opioid epidemic, to protecting the rights of all Marylanders. I look forward to working with him.”

“Baltimore City faces many pressing issues, and we need our leaders to place the interests of the citizens above their own,” Hur said at the time of Pugh’s conviction, adding:

Catherine Pugh betrayed the public trust for her personal gain and now faces three years in federal prison, where there is no parole—ever. Law enforcement will remain vigilant to ensure that our citizens receive the honesty and professionalism they deserve from government officials and will prosecute officials who betray the public’s trust.

“Cheryl Glenn solicited and accepted more than $33,000 in bribes in exchange for official actions instead of doing her duty and putting the interests of the public above her own,” Hur said after the July 2020 conviction. The U.S. attorney added:

We expect our elected officials to serve the public, not to use their positions of authority to line their own pockets. As this case demonstrates, we will work with our law enforcement partners to hold accountable those who betray the public trust. Cheryl Glenn will now pay the price for her greed by serving time in federal prison.

“Our democratic system relies on the integrity of our elected officials,” Hur said at the time. “Today’s sentence and our prosecution of former Maryland Sen. Nathaniel Oaks demonstrate that we will hold accountable those elected officials who use their offices to enrich themselves, rather than serve the interests of their constituents.”

During President George W. Bush’s administration, Hur went to work in a career position at the Justice Department as special assistant and later counsel to Christopher Wray, then the assistant attorney general in charge of the Criminal Division and now director of the FBI. There, Hur handled counterterrorism, corporate fraud, and appellate matters.

In 2007, Hur became an assistant U.S. attorney in Maryland, a position he held until 2014, over four years into the Obama administration.

5.  After the Justice Department

After leaving the Justice Department in early 2021, Hur became a member of the University System of Maryland’s Board of Regents.

Hur went to work full time as a partner in the Washington office of the law firm of Gibson, Dunn & Crutcher, which has offices across the United States. He is co-chairman of the firm’s crisis management practice group.