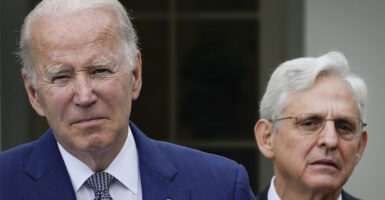 Attorney General Merrick Garland has assigned a Trump-appointed U.S. attorney to investigate classified documents dating to Joe Biden’s vice presidency discovered two months ago at a pro-Biden think tank, according to news reports. A senior legal expert at The Heritage Foundation explained the move to The Daily Signal.

Garland tapped John Lausch, U.S. attorney for the Northern District of Illinois, sources told CBS News. Lausch, whom then-President Donald Trump appointed in November 2017, will investigate the documents discovered in Biden’s private office at the Penn Biden Center, some of which bear classified markings and reportedly came from Biden’s office when he was vice president.

Richard Sauber, special counsel to the president, told CBS News that personal attorneys for Biden found the documents Nov. 2, six days before the midterm elections. The classified documents reportedly appeared in a box with other unclassified papers.

Lausch recently briefed Garland and eventually will submit a final report to the attorney general. He is expected to conclude the review soon.

John Malcolm, director of the Edwin Meese III Center for Legal and Judicial Studies at The Heritage Foundation, told The Daily Signal that many questions about the Biden documents remain. (The Daily Signal is Heritage’s multimedia news organization.)

“How did this come to the attention of the Justice Department?” Malcolm asked. “Did the DOJ come to Biden, or did Biden say, ‘I found these documents, I’m letting you know some of these were classified’?”

“The one shows he made a mistake and is trying to come clean, the other shows he’s hiding the ball,” Malcolm said.

Biden critics are comparing this revelation of the classified documents in Biden’s possession after he left the vice presidency in 2017 to the allegations that Trump kept and concealed classified information from the National Archives after leaving office in 2021, and to Hillary Clinton’s infamous unsecure computer server, on which she stored classified information in emails while she was secretary of state from 2009 to 2013.

“They just announced Joe Biden illegally kept classified documents from his vice presidency in his possession,” Outkick founder Clay Travis wrote, sharing Sauber’s statement about discovery of the documents. “I’m old enough to remember when the media told me this was impossible,” Travis wrote. “So much for that Trump indictment. Between Hillary and now Biden, this story is over.”

Yet Heritage’s Malcolm drew a contrast between the developing Biden story and the allegations that Trump faces.

“Trump is accused of not just taking these documents, but he’s then accused of hiding this stuff and moving it around to prevent DOJ from getting it,” the legal expert said.

Malcolm added that Garland likely tapped Lausch to investigate in order to protect the Justice Department from criticism.

“He does not want anybody accusing the Department of Justice of hiding, of sweeping criminal conduct under the rug,” Malcolm said of the attorney general. “He wants to make sure there isn’t even an appearance of bias.”

Malcolm noted that U.S. Attorney for Delaware David Weiss has been leading an investigation into Hunter Biden’s foreign business deals, conducted both while and after his father was vice president under President Barack Obama from 2009 to 2017. Weiss’ office reportedly is considering charges regarding nonpayment of taxes and lying to investigators.

“So by having the Hunter Biden laptop investigation conducted by a U.S. attorney who is a Trump holdover and by having this investigated by a Trump U.S. attorney, it’s an attempt to insulate the department from being accused of whitewashing criminal conduct,” Malcolm told The Daily Signal.

“When there are public corruption investigations that could implicate people affiliated with the new administration, they want to hold people over,” he said.